DISCORD Channel link: The No Bollox League on DISCORD - chat room
Alas not many people took the chat rooms option up for my leagues but there still there should anyone want to lead the way - encourage other GM’s to join you in chat - each of my leagues has its own dedicated room to discuss things about that particular league but there is a general chat area for anyone who partakes in any BLM fantasy games I run here: BLM Fantasy Games general chat room on DISCORD

THE NO BOLLOX LEAGUE - XVI

I first set this league up in 2005 as I wanted to play Americans at their own game and show British peeps could be just as good - if not better at their fantasy football.

I was also fed up with owners giving up or not playing out the season - hence the leagues name (born out of frustration). Over the years I have replaced owners that didn’t set line ups and modified my internal rules to create what has become a very competitive league.

The key element being a 50/50 make up of team coaches from the UK & USA (8 Americans & 8 Brits). It makes for a rather nice added rivalry as we all still compete to beat one another but as a side bar whoever wins the Super Bowl also wins a title for their respective nation.

Any sections boxed and bolded like this paragraph are to bring attention to new or amended internal rules for the forth coming season (as my league is developing year on year) and helps returning team coaches to quickly find what’s new or changed from the previous season.

From season 8 this league introduced IDP’s (Individual Defensive Players instead of the traditional block Defense) along with draft pick trading and keepers that kicked in from season 9. Keepers come from your finishing squads as they were the end of the previous season - so worth long term planing and taking note of the following keeper rules…

Each owner/team will be allowed to keep up to a maximum of 2 players however only one from each side of the ball (Offense/Defense). So in effect if keeping 2 players one has to be an IDP. You do not have to keep any players if you so wish, each owner has the choice each year - 0, 1 or 2 players. There will be a keeper deadline before the next years draft so it is each owners responsibility to look out for that deadline as no changes to selection(s) can be made after it.

Any one who does not follow the one from each side of the ball Keeper Rule and tries to keep 2 Offensive players or 2 IDP players will find they only have 1 keeper. The 2nd Keeper choice who ever it is will be over-ridden prior to the draft and be changed to ‘no keeper selected’.

Keepers will cost you the draft position they were drafted in the previous season (regardless of who drafted them). Only exception to this is when the same owner keeps the same player in consecutive seasons - then the player shifts up 1 round per year - unless he’s a first round pick - for obvious reasons. Any player kept that was undrafted the previous year will count as a last round selection.

You can find the previous seasons draft results within the league itself (here is a link): NBL 2019 Draft Results

For those teams that make the playoffs proper (teams finishing 1st-6th), there draft order will be a reverse of the previous years finishing positions as decided by NFL.com - so the previous years champion will still draft last in round 1 (*16th) and the team finishing 6th (*11th). [*excluding draft pick trading]

However I noticed in the dead rubber games some GM’s had a tendency to tank in order to get a more favourable draft position the following season. So to address that from the end of the 2014 season the following changes took affect regarding draft spots from the consolation play-off games.

If you were not in the running for the title (i.e. in the playoffs proper), there was nothing to play for except next years draft position - and the way it was, the worse you did in the dead games, the better your draft pick position the next year. This encouraged GM’s who were out of the playoffs not to try and win, actually often hoping to lose by starting their worst players (just to avoid falling foul of the strike rule, as there’s nothing else riding on those results).

So to correct that anomaly is why I introduced this rule change - making the so called dead rubber games un-dead. Each of these consolation games are now worth winning because your now playing for a higher draft spot. As this part of the draft order involving the 10 non-championship playoff teams is inverted - to reward their post season wins, however pointless they may seem at the time.

So the 6 proper playoff teams will still keep their draft positions (16th - 11th).

However the rest (consolation playoff teams) will now go like this…

I think this will be good for the league as now tanking for a better draft spot will not fly as the dead rubber games have something riding on them. I feel this should also help with the also ran GM’s trading away their better players with late round draft picks to the playoff bound GM’s who are willing to sell their next seasons chances on winning this year by agreeing to trades involving their bad players but with higher round draft picks from the following season - which is skewing the integrity of the league imho.

It was talked about a lot in the 2017 season how imbalanced IDP scores were and how any given week an IDP player could score you anything from just a few points to many tens of points and the spectrum was to much. For this reason for the 2019 season onward I adjusted the IDPs points down but unfortunately NFL.com did not round down so the half point given for Assisted Tackles made this league end up with fractional scores - which I did not want as the NBL has always been a non fractional scoring league. So for this reason I have had to adjust the Assisted Tackles category up to a full point (from half a point) to insure that does not happen.

So the NBL’s IDP scoring is as follows: 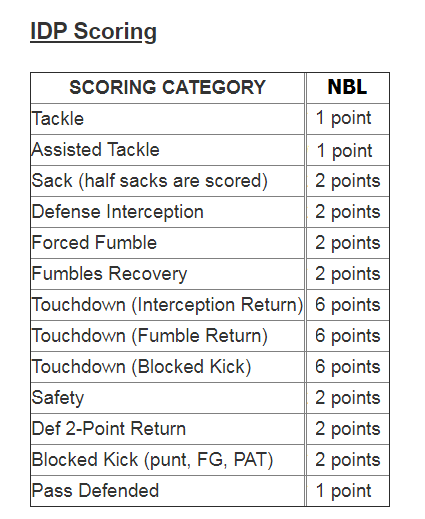 In the 2017 season a poll was conducted during the post season to see what standings tie-breaker we should use going forwards as some GM’s did not like the default option of ‘Head to Head Record’ and the following is the result of that poll which is why we use ‘Points For’ as the Tiebreaker from 2018 onwards: 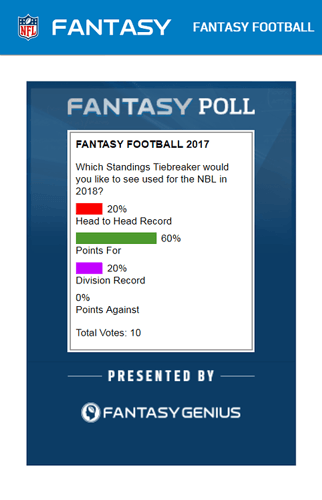 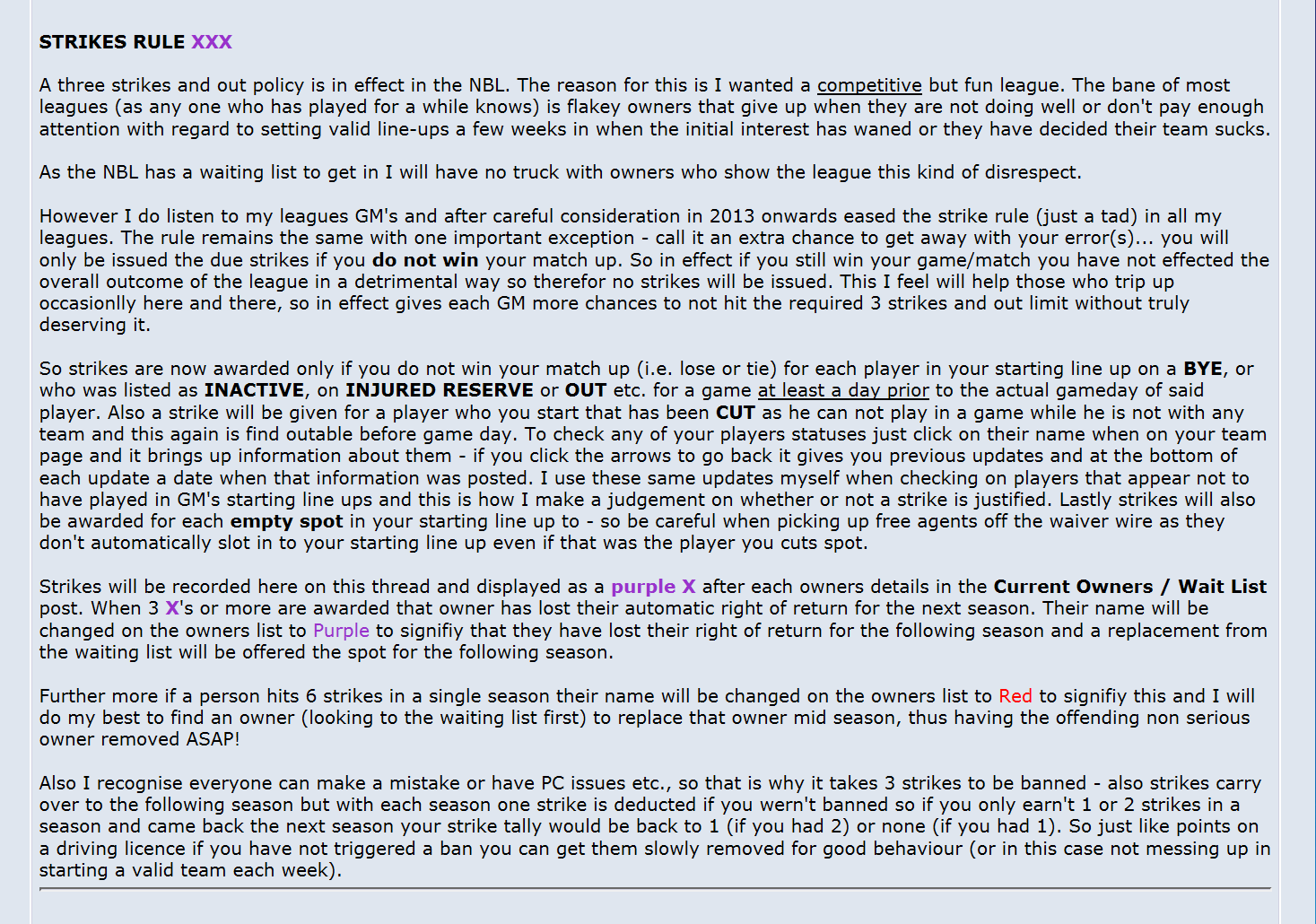 New from this season (2020) strikes will also be issued for not being seen to vote in an official poll posted within the league on NFL.com. It’s been the hardest thing for me as a commissioner to get people to engage with me on rules and proposals to do with the league like having a trade deadline, expansion etc., so now it’s mandatory to partake in polls and to be seen to have voted.

I am not sure how you do this on the phone app but to do this via the standard internet using a browser - which can also be done on a smart phone - you scroll down the leagues home page to the message board and to the right of this you will see the latest poll. To the bottom right of this poll box you will see a link that says ‘More Polls >’ click this and it will open the poll with its message board below it. Here (you may need to scroll down) you sometimes will find more information about the poll and is also the place you type “Voted” to show you have voted after you have done so in that particular poll. To the top right of the poll you will see an arrow < and that will let you navigate back to see older polls and where you should check you have voted in each one and posted below each one to say you have Voted as if you have not voted or forgotten to post you have and not everyone has voted then anyone I can’t be sure did vote will pick up a Strike after 28 days of the Poll being posted. I hate having to do this but for many many seasons people have just not been engaging enough to help me shape the league by voting in polls so felt I had to do this so I can weed out and replace non committed GM’s with ones who buy into the ethos behind this custom keeper league.

THE NO BOLLOX LEAGUE (NFL.com) Struck Out & Permanently Banned List 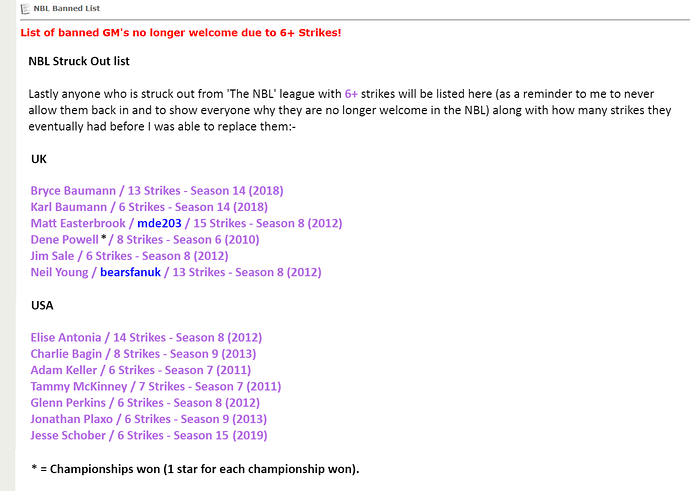 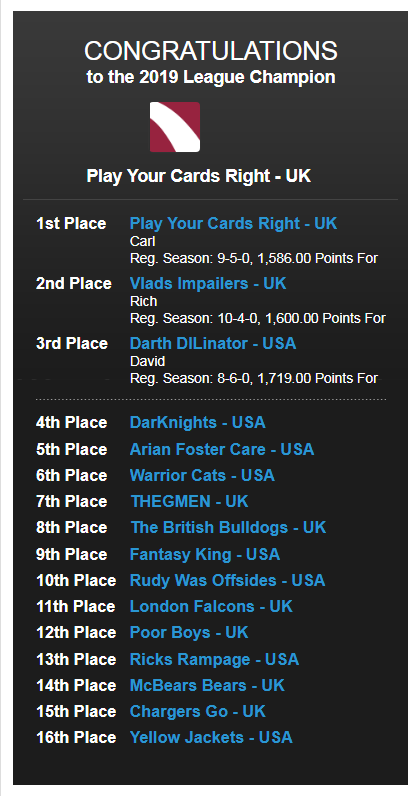 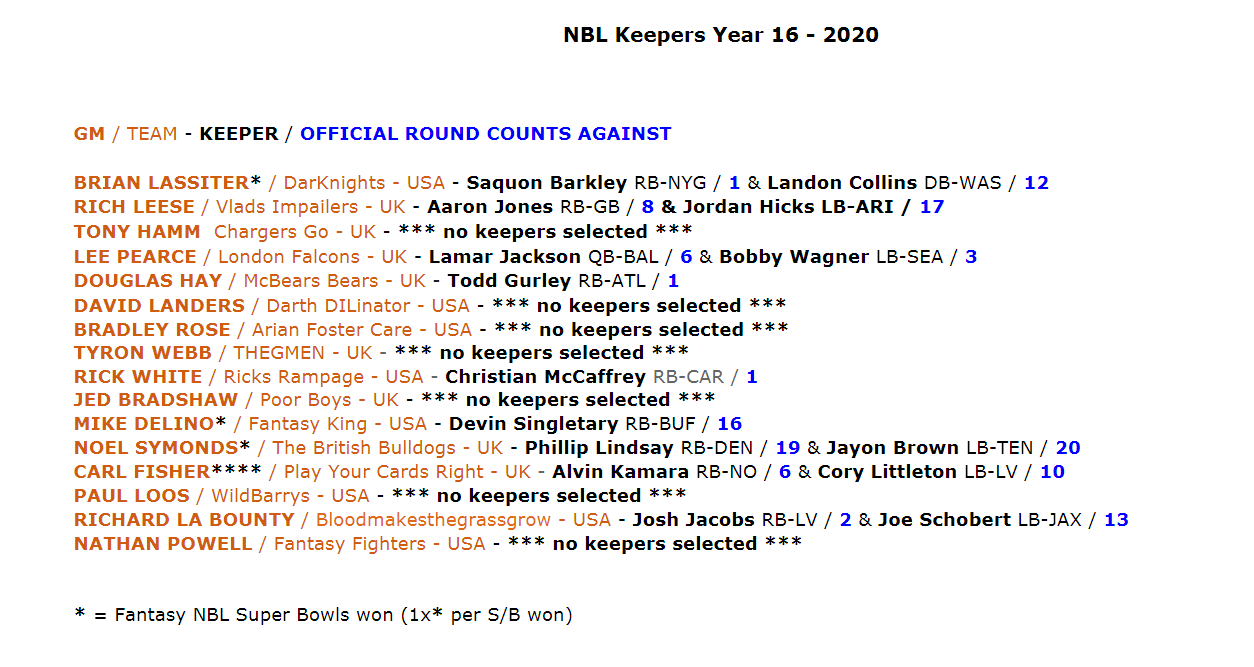 Annual Reorganising of the Divisions for 2020…

There will be 2 US and 2 UK teams in each Division. Once Divisions are drawn whichever one I am drawn in will become the North (as a little gift to myself as I am a Lions fan and they are in the NFC North) it really makes no material difference to the fantasy season whatsoever as the teams drawn with me are still the same teams just they to will be in the North division. 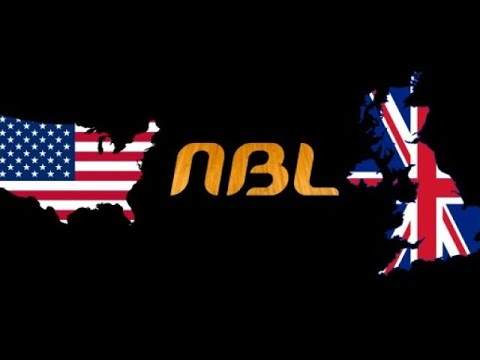 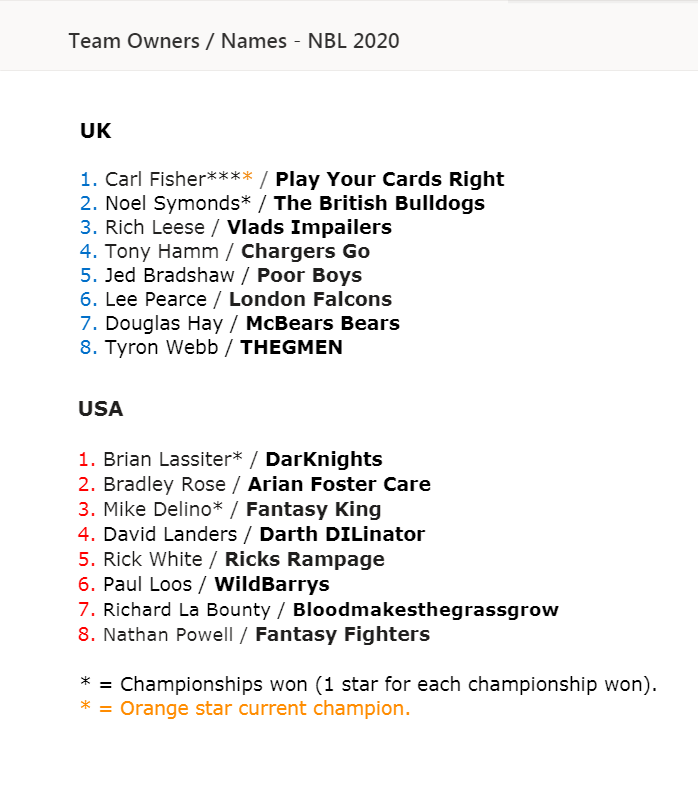 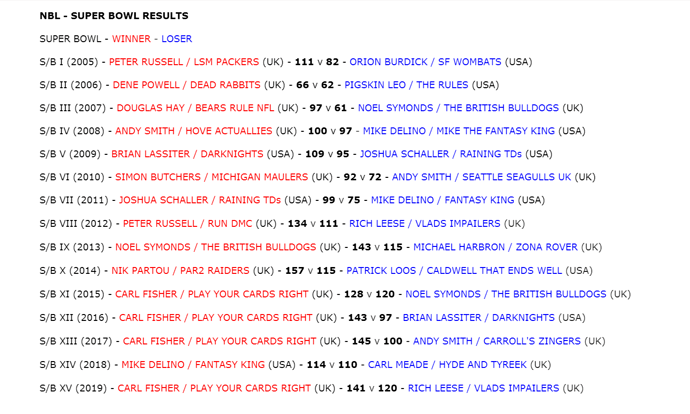 Sad to report the following strike is awarded for NFL Week 1:

x1 Started DB - Charvarius Ward - (KC) who was ruled out before his teams actual game day.

Won’t play Sunday
Ward has been ruled out for Sunday’s game against the Chargers, Nate Taylor of The Athletic reports.

Analysis: Rashad Fenton is expected to draw the start opposite rookie L’Jarius Sneed with Ward out. Considering the team believed Ward had a shot at playing earlier this week, there’s a good chance he’ll be back in action when the Chiefs travel to Baltimore in Week 3. 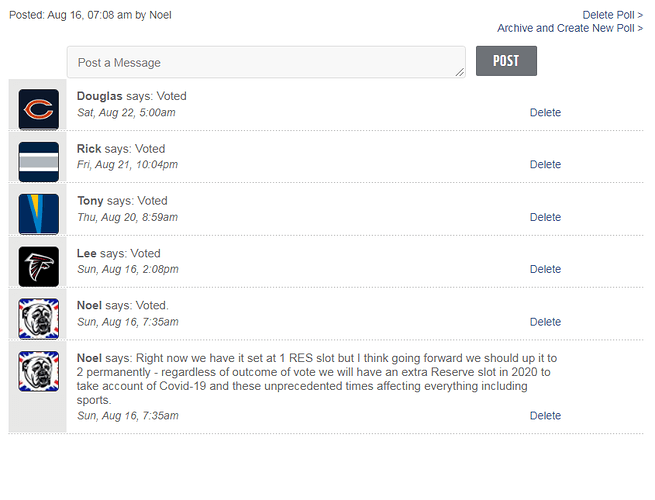 Okay the vote is in favour of increasing to 2 RESERVE slots permanently but sadly only 5 GM’s out of 16 bothered to vote. The poll was only closed today 24th September 2020 - way over the 28 days by rule a poll has to be up for before closing so the 11 GM’s (listed below) who did not vote as per the new poll voting rules starting this season will all pick up a strike.