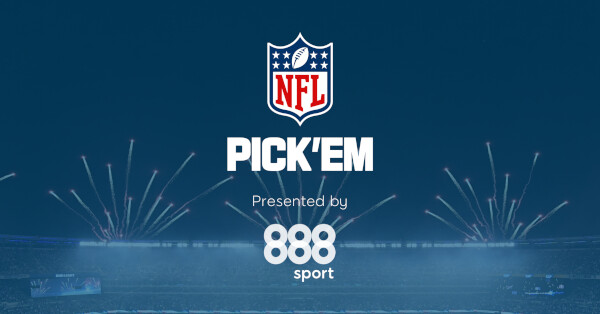 After a one-year hiatus I noticed on Monday (very last minute) UK NFL.com launched this game - which I’ve not seen since the 2020 season!

UK NFL.com have re-launched their Pick’Em game with a new sponsor (888 Sport as opposed to Sky Sports) so I have set up a small stakes private money league like I have in past years (when the game has been run). Despite the late time frame, I do hope I can get a decent entry pool (so feel free to forward this e-mail on to anyone you think might like to join in). We need a decent entry pool to make it both competitive and decent prize pay-outs as I’m paying top 3 at the conclusion of the game.

So, my private money league is £10 to enter with a top 3 pay-out as follows:

Prizes are given as percentages as I don’t know how many entrants, I will get but all entry fees go back out as prizes so the bigger the league the bigger the pay-outs.

So that’s it, please spread the word and get your mates involved. All I ask is everyone who joins to have paid before the first game of NFL Week 2 starts.

I* you know you want in clicking this link should add you directly to the league:

If you don’t know the score regards how to make payment just contact me to ask (either e-mail me at my fantasy games addy or PM me from here on the TFP forum).

That’s it, hope to see you in my league soon.

Well we are past the start of NFL Game Week 3 and still Dean Allen @Yorkshiredragon has not coughed up the massive entry fee of £10 so I’m gonna work on getting him deleted from my league. Alas this means our already small league will be even smaller now (just 8 souls) and the prize pot reduced by a tenner. But 3 weeks in is plenty long enough to pay your entry fee if you had any intention of doing so!

Meaning Prizes will now be as follows:

Dean Allen @Yorkshiredragon has been added to my BLM FG welchers list:

hes going to win itv7, could he not pay out of them winnings

You know I never connected the dots, didn’t click to you made this post he was in other on-going live games of mine. Yep, as I have been unable to remove him from the Pick 'Em league I will most certainly take the tenner entry fee out of his prize money for ITV7 and then re-advise the prizes here (once ITV7 has resulted). Good shout!

Do remind me come end of December to do this though, in case I have forgotten!

Okay all, Gary was correct and the welcher (Dean Allen / Yorkshiredragon) did infact go on to win my ITV7 Racing 2022 money league: BLM’s ITV7 Racing - 2022 (£10 Money League) WINNERS so I will take payment for this game’s entry fee what he welched on out of his winnings to make the prize pot what it should of been as I was unable to delete his entry from this league and he never removed it himself either, so the new adjusted prizes for this league are now:

Edit: Dean Allen / Yorkshiredragon is no longer disqualified in regards to this game (see my post below enttitled IMPORTANT) for why this is.

I did all my picks before TNF and it appeared to auto save them just as it has every week of season for me so thought no more of it - just logged into site to check on standings after this weeks games and it’s not saved any of my picks accept my TNF entry - as you enter a margin of victory score and if I had not it would give me 0 margin - but I have a value entered. However for all the other games after TNF it has just given me all the away teams. I would of done every game when I did my TNF entry it is my routine and it auto saves them. I have sent them a complaint not that they will own up to any site issues and I will have to suck it up but just curious if anyone else has been screwed this week (or any other weeks this season like this)?

Any one who knows me knows I would not do this - I was only a few points away from top spot last week now I’m fucked - won’t even make the lesser money places - I will not be doing this websites game ever again going forwards now as I can’t trust it. I am so hacked off I can’t tell you!

I accept losing in a money games by my own hand but not when I’ve entered and the site has lost my picks - that’s shady as fuck! I feel like smashing something up - I am raging!!!

Its a bid odd that website im sometimes not sure myself. Strange no save button

Dean Allen / Yorkshiredragon - Has been in contact with me about my decision to disqualify him from this game yet still take payment as not being fair and that if I have taken payment then I must let him stand to win any monetary prizes or give him his entry fee back. As he did not delete himself from the league, has been in it all season, there was not a way for me to remove him from the league despite the rules on site saying I should have had that facility in private leagues, nflpick’em.co.uk would not remove him for me and he has been doing his picks all season as his entry score has been climbing each week he has clearly been playing along just like the rest of us and as I value my name and reputation concerening monetary games I have decided to relent and should his entry finish in a monetary spot he will be paid out. HE IS NO LONGER DISQUALIFIED from this game.

I wondered why you had scored so low that really isn’t on.

Another thing that is BS is the game admin awarding a point to those who picked the Bengals to win. Like you Noel the money is secondary it is about fairness.

Might not matter at the end of the season but if I lose by 1 point I will not be impressed.

Seems churlish talking about this given events of yesterday, let’s hope Hamlin makes a full recovery.

My rant was before MNF so had no idea about those events at time of posting. I really miss the NFL.com Weekly Pick’em game - why did they stop it, was far better looking than this one plus it included post season.

I’m sick to my stomach still as I know I would of scored way more - Chiefs, Patriots and Lions 100% know I selected those as bankers, even picked Lions in the (RYP) Survivor pool (WTA 3) I’m still alive in so stands to reason I would of selected them here to.

But small potatoes compared to Damar Hamlin. Hope he makes a full recovery. Also gamesite should void MNF to game is finished or replayed. Awarding a point to the team leading at suspension of game is wrong IMHO but what do we expect from a site that overides picks.

Anyone else having problems accessing the site, been down all morning?

Yes I was unable to get on Sunday so goodness knows if it remembered my picks for this week - takes the pee - it cost me my chances Week 17 losing all my picks and they say there’s nothing wrong blar blar blar. Won’t be doing this sites game next season. I miss NFL.com’s version.

Edit: I called them out on social media and posted in NFLUK Facebook group and others said same. So you were not the only one. I also noticed other countries versions worked seems they have a seperate mirror site for other nations doing same game - like Australia. Sucks they cant let everyone be in one game for all.

Yeah I saw Canada have a separate game as well, very odd.

Love the prediction game hopefully we can find something for next year.

Some good ones on runyourpool. Spread and money line ones. Dont know if its free though

This website is so bad - some new person has joined I’ve not seen before (Steven R) in the last week and I have no ability to remove them and the website is about as responsive as a corpse!

The predictions we made for the wild card weekend have disappeared from the site.

When I checked the rules they said that it’s a regular season game only so I thinked they fucked up by carrying it on.

They are a shambles.

I’m still sore that I will miss out cashing due to no fault of my own when site failed to register or rather lost most my picks for NFL Week 17 (I think it was Week 17). I was 2nd at the time to. I must refrain from setting a league up with this shower of a site next season - I dunno why NFL.com got rid of their far superior Weekly Pick’em game!

does this game not run through playoffs?

It was, but then it seems not - as @brfcfan said - they are a complete shambles.

If you can’t find anything for next season Noel I don’t mind running a manual game, it would be a shame not to have a prediction league.