OKAY peoples - this is my favourite NFL fantasy game so every year really try to push this so please if you do decide to enter one of my (bluelionman) fantasy NFL money games please make it this one. This is a game I put an awful lot of work into running - updating the players list and doing the weekly scoring myself on Google sheets.

However, unlike that game this version runs for the entire NFL season (from September 8th, 2022 thru to the Super Bowl final on February 12th, 2023).

Any player not listed you can request and I will add them. I have tried my best to update all players to their current teams if you spot any mistakes, please inform me so I can correct them.

You must stay within the budget of $57 Million .

Just create your team by filling in the form at the end of this e-mail and send it to me before the deadline which is the start of the first game of the NFL regular season - (Thursday 8th September). The system is simple. You must select one Head Coach, one Quarter-Back, two Running Backs, two Wide Receivers, one Tight End, one Kicker and one Team Defence.

Anyone who scores a touchdown gets 6 points, just like the real thing. If a *Quarterback throws a touchdown pass he also scores 3 points. If anyone returns a fumble or an interception for a TD then the Defence scores 6 points, they also score 2 points for a safety. Kickers get 3 points for a field goal and 1 point for extra points (PAT’s - Point After Touchdowns), while anyone scoring a two-point conversion scores 2 points. If a *QB throws a two-point pass he scores an additional 1 point.

To mirror the change in the real NFL of a few seasons ago if PAT’s are blocked and returned, they earn 2 points so this will also apply to the relevant fantasy teams Defence.

Additionally in this game (different from how First Down’s was) Defences will incorporate special teams plays - so all punt and kick-off return’s that go for a TD will earn 6 points for the relevant Defence. Furthermore, the individual player on a special teams play that scores will also earn the same number of points as awarded to the Defence. So, for instance, if you have a WR, RB or TE also on return duties and he takes one to the house, not only will the Defence score 6 points he will individually himself to.

Your Head Coach will score 3 points for every game his team wins and 1 point for any game that finishes as tied in the regular season. However, Head Coaches will score 6 points for post season wins.

Also Head Coaches will earn a bonus of 6 points if their team makes the playoffs. This bonus is doubled (to 12 points) if your coach is your original HC and you have not changed him at all since the commencement of the game. Only the HC on your teams’ roster at the end of the regular season (WK 18) qualifies for the bonus points (if applicable) and these points are added to the Head Coach’s score for NFL Week 18. Also, a further bonus of 6 points is awarded to each Head Coach that wins their division - this bonus is awarded and applied to all applicable Head Coach’s in NFL Week 18. (However please note - there is no doubling up of this bonus for original HC’s).

Finally, points will be doubled for the final itself (the Super Bowl).

Every entrant will be sent a link to a Google Sheets spread sheet listing everyone’s teams between the start of NFL Week 1’s first game and the main tranche of games that start on the Sunday (September 11th). This is so you can see everything is open and above board, as well as allowing you to follow the season more closely on TV and via the internet, if you so choose. (You’ll even be able to work out the team points for yourself should you like to do so). My team entries will be sent by e-mail to every entrant at kick-off of that first Thursday night opening season game to show there is no funny business.

On the Google Sheets ‘Gridiron Game (Season Long) 2022/23 - Entered Teams’ spread sheet each teams individual player scores will be updated weekly so you can see how you are doing compared to your rivals. This is also where teams will be updated after each trade window.

TRADES - You can trade up to three player/positions at each trade window. Your team’s value still cannot exceed $57 million after you have traded. You do not have to trade; your team can remain the same from start to finish. However, you must submit your trade(s) to me before the start of the following weeks games by e-mail or PM from the TFP forum. Please make sure you put NFL Trades in the subject header line. Updated team line ups will be entered on the Google Sheets team entries page and be viewable to everyone after each trade deadline.

Between the end of the Regular Season and the start of the Playoffs (trades will take effect from Sat. January 14th 2023) 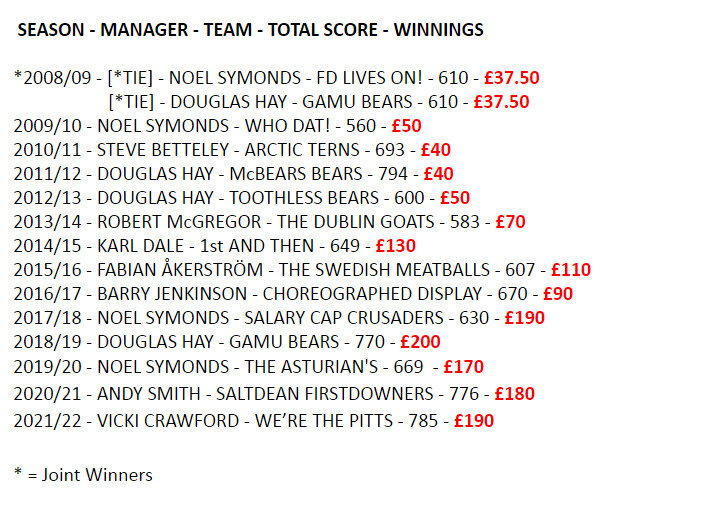 If you don’t see me in person and don’t know the score regarding payment then please contact me for payment information. You can do this by Private Messaging (PM’ing) me from here (the TFP forum).

Gary Johnson - I’D LOVE IT WE BEAT THEM!

Okay all, I have had a lot of last day entries to this game and it’s just to much to check them all and type them across to my spread sheet before first game starts tonight so am posting my two entries here now so no one can accuse me of cheating.

So here is me posting my 2 teams before start of first game of Week 1: 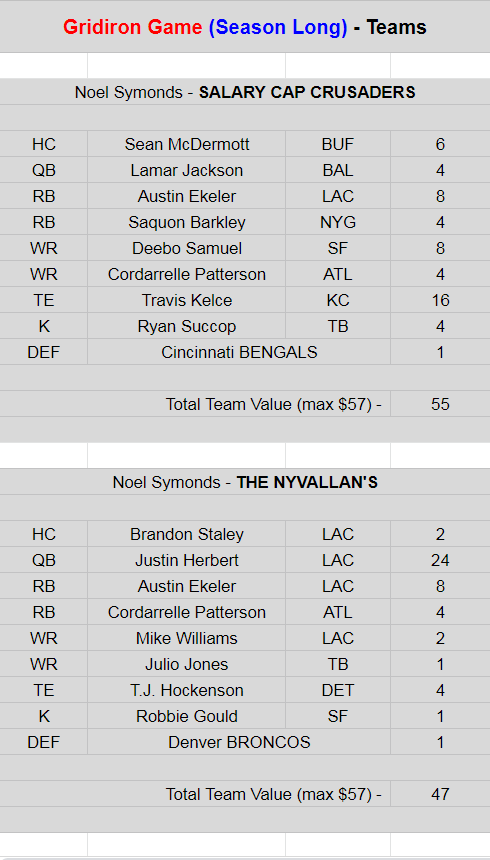 The above link will take you to every entrants current team line-ups on Google Sheets, with the individual players weekly scores along with each teams trades (at the 3 trade windows) which will be updated weekly throughout the season.

The above link will take you to the current players list for this season on Google Sheets. If a player you want is not listed just PM or e-mail me who it is, position and team and I will look to get them added ASAP. Players prices do not change during a season - only between seasons.

have you got a link for entered teams, that link above was taking me to standings table

Thanks for pointing that out Gary - should be correct now.

Okay all - we had one welcher (non payer): Dean Allen (@Yorkshiredragon) - YORKSHIRE DRAGONS meaning we lose £15 from the prize pot as compared to what I originally indicated.

I can confirm everyone else has paid giving me my biggest ever entry pool still for this game (26 teams) making the prizes as follows: 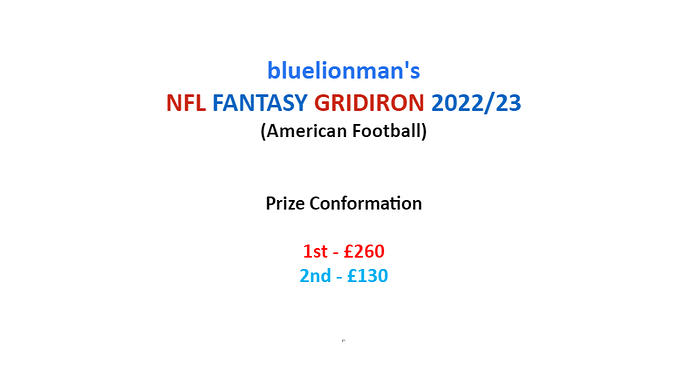 I hope you all enjoy the season - I do have a stand alone version of this game that covers the post season only - so do look out for that nearer the play-offs.

Dean Allen @Yorkshiredragon has been added to my BLM FG welchers list:

Hi there Noel, just a query on week 3, Travis Kelce scored a touchdown which is 6 pts, but you have him down for 8 ?

Andy is correct - he earned another 2 points scoring a 2 point AAT (Atempt After Touchdown) which teams can go for instead of a PAT.