This will be the eighteenth year I have run an online mini-league on the Premier Leagues own fantasy football game.

Quite simply - register online, select your team and then if you wish join one or both of my mini leagues.

My Classic League is £15 (£10 + £5) total to enter. This is because of the new Cup competition FPL introduced last season in Classic Scoring Leagues. So, the extra £5 entry per team is to make the prize for the Cup winner. 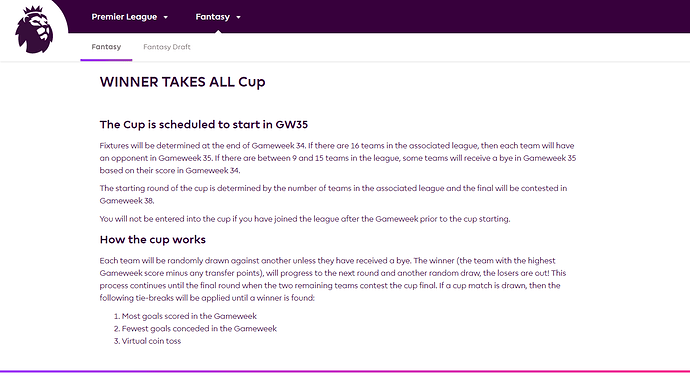 However, there is no Cup competition in The Head-to-Head league so it is just £10 to enter.

I RESTARTED my Classic league this season as FPL gave me the option to do so - which means anyone who played in it last year will automatically be added to my league this season if they do a team on the new FPL website so as I cannot be sure everyone will want to play for money in my classic WTA league again this season I will delete any unpaid for teams once the season starts. So, if you do want to play in this league this season make sure to pay your entry fee(s) before season kicks off. If your new to my FPL leagues or did not play in my leagues last year these are the codes:

The other league I run is a ‘head to head’ style league where you are matched with another opponent in the league each week of the season and your weekly score versus the person you’re playing decides whether you win, lose or draw and like in the real Premier League you get 3 points a win, 1 point a draw and nothing for a loss. Those points decide your place within the league and with this league whomever is top of the league at the end of the season wins all the money (as the head-to-head league does not have a cup competition).

But also, in the Classic league the extra £5 entry fee goes to make up the internal Cup prize. (so # of teams x £5 = cup prize).

The more teams, the more prize money on offer - so go recruit your friends (but not if there any good)!

FPL lets you join many leagues but you can only have one team and that team is in however many leagues you join - so it’s no more time consuming to join multiple leagues. So, if you’re doing this game already think about joining one or both of my money leagues - after all it’s only a few quid and you may win a nice prize for your season’s efforts… always more fun when there’s money on it - don’t you think?

You can play in these leagues from anywhere in the world and everyone is welcome. However I seem to get brand new names every season join and no contact is made to pay so from now on anyone who has not paid the entry fee in the Classic league will be deleted during Gameweek one and in the Head to Head league I will have a cull on the first day of the season before first deadline is reached and remove any unpaid for teams. So, if you truly want in to these money leagues make sure you pay before the season starts.

If your new to my games and don’t know how to pay me or simply forgotten just e-mail me, PM me from here (TFP forum) or hit me up on my Discord channel and I’ll send you the info. You can play in this league from anywhere in the world. Lastly I seem to get every year brand new names join and no contact is made to pay so from now on anyone who has not paid the entry fee in the Classic league will be deleted during gameweek one and in the Head to Head league I will have a cull on the first day of the season before first deadline is reached and remove any unpaid for teams. So if you truly want in make sure you pay before season starts.

PS - I keep a winner’s history for all fantasy games I run so thought you might like to see that history for my FPL money leagues (perhaps your name can appear here at the end of this coming season):

Hi Noel, I’d certainly be interested in joining both head to head and classic cash FPL leagues please. Are you running a cash draft league this season too?

Yes Noel is running a cash draft League - draft is this Sunday - details are here:

Amazing cheers mate. I’ve had a read through and just messaged Noel to sign up.

You a city fan yourself then? Can’t wait for the season, should be a cracker!

Yep - Bristol born and bred here, grew up in Bedminster so had no choice and now it’s too late

I’m guessing from your name you’re based further north? Assuming you’ve moved up there instead of somehow having chosen City over Liverpool as a child?!

Yes feeling optimistic about the season - it can’t be worse than last season right…?!!

Yeah I was born and bred in Clevedon (family still down there) up until going off to uni and had a season ticket for most of my teenage years in the mid 2000s, suffering through the endless league 1 days!

I then met my now wife at uni and we moved up here to the Wirral ten years ago (if you look at a map of North West, it’s the little peninsular that sticks out above Chester and West of Liverpool) it’s a lovely part of the world with loads of nice beaches and rural walks etc (and everything, house prices especially, is sooo much cheaper than in the West country which is a huge plus!) but still head back as often as I can to see family etc.

Are you able to get to many games? Since being up here I’ve been to as many of the North West away days as possible but being the proud dad to a little 8 month old has hampered me somewhat recently haha!

Gotcha. I have family in Clevedon too - played for Clevedon Rugby as a kid.

Yes I’ve been up to the Wirral a few times - great place.

I’ve had a season ticket since I was a kid, except for my uni years, so yes I manage to get down to the Gate pretty regularly - don’t tend to make many away matches though.

I have 41 teams showing in my Classic WTA money league but as of right now only 31 have been paid for. I said I would delete any unpaid for teams once season started but as I was slow to reply to some e-mails will leave it to Monday to allow a bit more time for those of you that need to sort this out but anyone that has not been in contact with me or paid for their team will be removed for the league tomorrow. So if you wanted in make contact with me.

Okay after booting the non paid for teams out of my FPL WTA Classic league we were left with 32 paid up entrants. So that makes the prizes for 2022/23 season as follows:

In my FPL WTA Head to Head league I got 23 paid entries making the prize for the eventual winner as follows: