Evening all !
We had a bit of fun with a bestball league for the last baseball season. I will run it again if there is enough interest.

Prizes will be sorted out once I know how many are playing, we got a decent 11 last time around.

Don’t let @Rick_Spangle 's Isotopes get back to back wins !!

Hi Jon, ready to defend my title! - paypalling you now.

I’ll be online from 7 I reckon, ready to start drafting at 7.30. Fingers crossed the Fantrax site will be a little less glitchy than last year…

Cheers Jon, see you all in the draft room later

Very early scores on the doors… 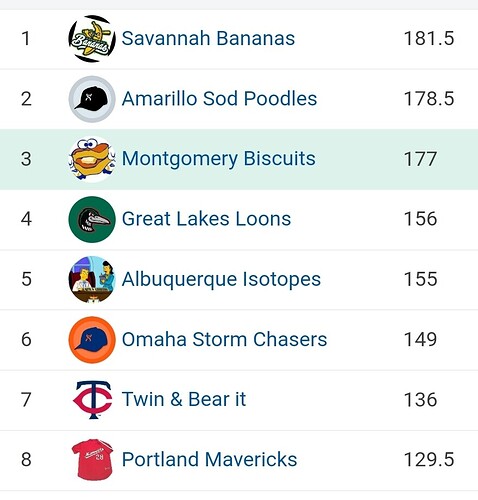 Sam starting well, Javier not so much. Lots of time to go, though! 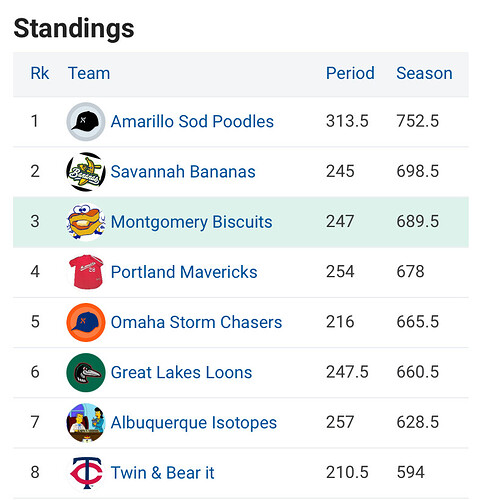 Mid May - Mozza still hanging onto a slim lead. Chris still bringing up the rear! 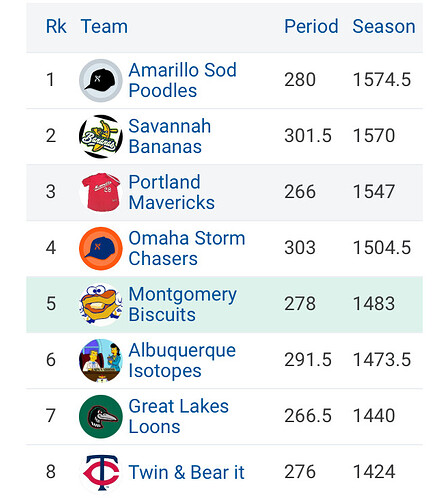 Early June…
Mozza still top, Chris still last!
A shuffling of the pack for the other 6 places - and we are still only a third of the way through the season, so plenty of time for more changes 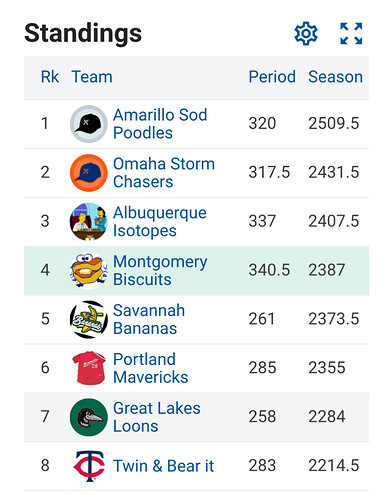 Late June…as before, Mozza still top of the table, Chris still bottom. Trouble on the horizon for the leader maybe, as last year’s top two finishers are now breathing down his neck in second and third place! 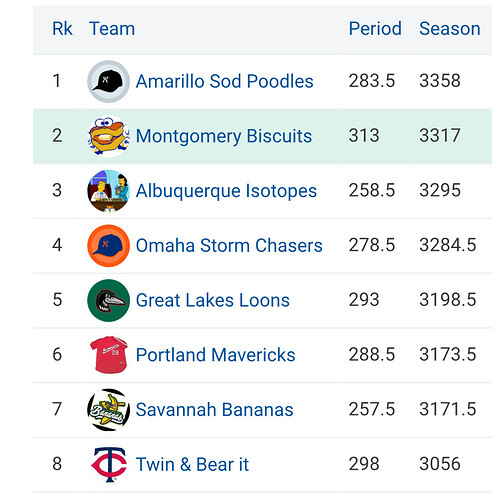 Couple of great weeks, mostly from Gerrit Cole, has launched yours truly into the lead

- Flacco, Rick Spangle, and long time leader Mozza all packed close together and ready to pounce if I slip up.
About to break for the all star game, so we’ll call this the half-time score. Chris really needs to start thinking about making that comeback run some time soon… 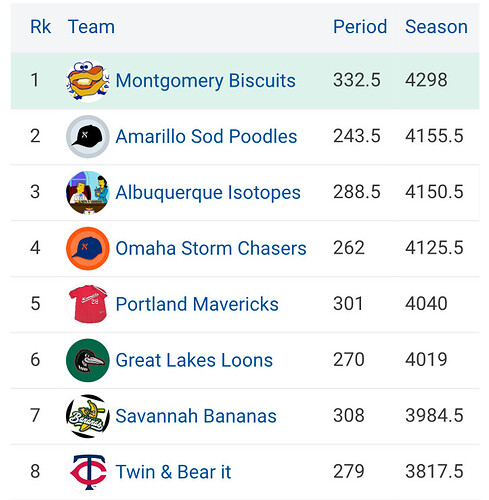 Not done an update for a while, so… is it in bad taste to point out that I, the commissioner, am winning comfortably at the moment? Because I am!
Reigning champ @Rick_Spangle my only serious challenger… Chris remains anchored to the bottom, as he has been all season 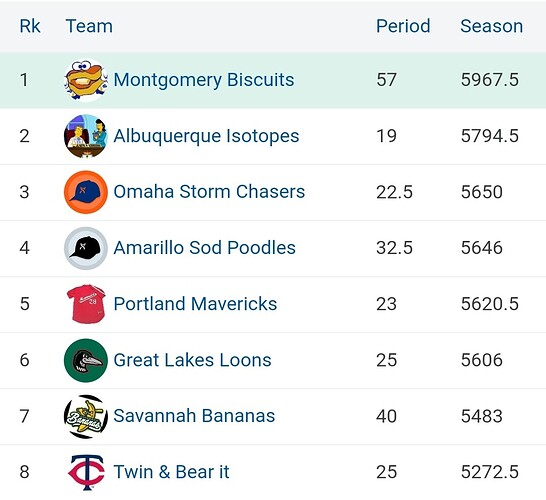 I still have vague hopes of catching you, but my pitchers are going down left right and centre!

Season almost over… teams have all played about 90% of their fixtures now.
After my glorious summer of leading our league, Andy has been chipping away at my lead for a while, and overtook me earlier in the month. Very little between us now, and it certainly looks like a two horse race. (unless Chris’ long-promised late season surge happens in grand style…) 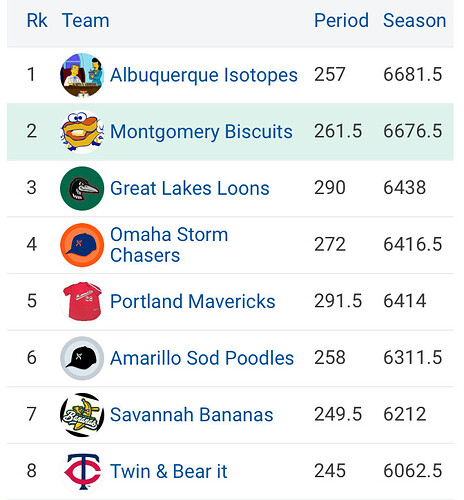 This is going to be close - down to the wire!

Crazy close, so near to the end of the season…!

Incredibly close… the regular season finishes Wednesday, and there are 4.5 points separating me and @Rick_Spangle at the top!
@TheMalcyBarKid and @roookie are even tighter in their battle for the bronze medal position.
I suspect the four places in the bottom half of the table are pretty much set now though.
Exciting finale!! 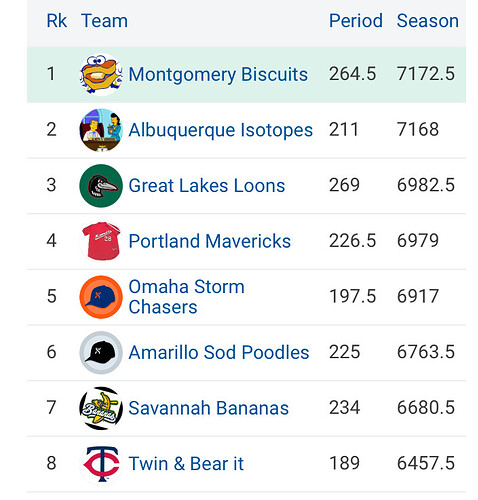 Ah well, after I hyped up the close finish to the season, I pulled clear over the last couple of days… last season’s top two managers did it again, but in the opposite order this time.
Hats off also to Chris - a lofty 7th place in the first update of the season, but stone last in every one after that!! 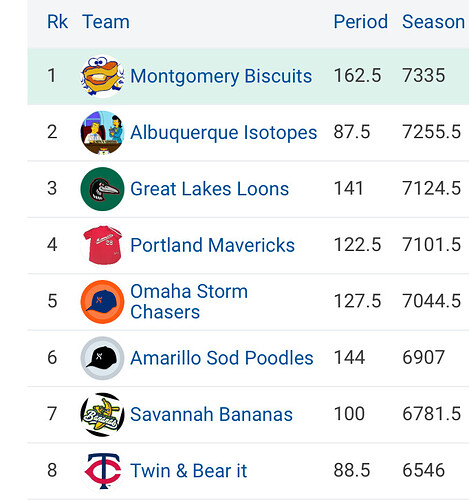 Andy, I will get prize money over to you.
Everyone else, better luck next year, and enjoy the playoffs and World Series!

Congrats Jon, I ended with the whimperiest of whimpers! Thanks for setting the comp up
(Edit) and thanks, money received.