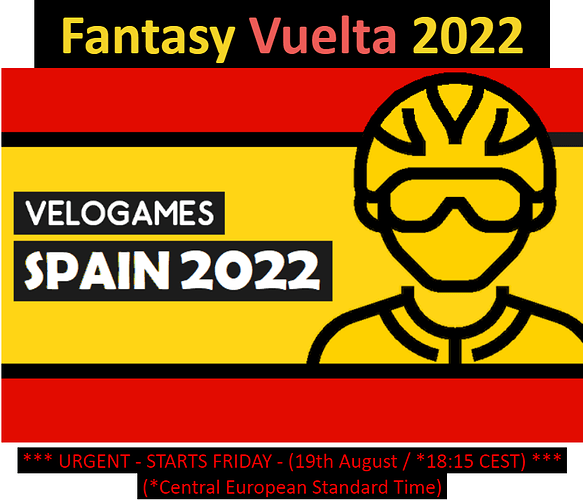 Make sure to check how your own time zone differs from Central European Time to make sure you meet the entry deadline!

(now known as SPAIN 2022 for legal reasons) has launched.

Velogames is a free web site that runs fantasy cycling games on various cycle races including Grand Tours such as the Giro d’Italia, Tour de France and Vuelta a España.

Their tour games are perfect for those of you that don’t have much time but like to have a go, as the only time you need to spend on any of their classic games is at the beginning selecting a team before the start of the race (as there are no transfers at all in Velogames Grand Tour cycling classic games tables).

However, in a recent change for those that like a more in-depth challenge there are transfers available in Velogames new Stage Hunter games tables (but for my money leagues I do not pay attention to these tables).

So please click on this link to check their website out and familiarise yourself with the rules and how points are awarded: Velogames / Spain 2022 / Rules

The game is free and you can be in up to 5 private mini leagues.

Now to create some rivalry I have set up a private mini league which I am taking a fiver ( £5 ) off anyone who comes in to it. This is just to make up a prize for the eventual winner of my mini-league. Now because Velogames keeps the same mini league for every game these days (saving me having to set up a new one every game) it will automatically put people in my league who have joined it in previous games. As I can’t be sure who wishes to partake for money each cycling tour, I run a money league on it is important if you want to play for money in my WTA league you pay before the start of the race as just before or soon after the start, I will delete any unpaid for entries.

I think by the leagues name it’s self-explanatory how the money gets paid out - more teams in the league, more money for the winner.

PAYMENT: Just PM me from here (TFP forum) for how to pay if you don’t see me in person and don’t know the standard procedure.

You can get live coverage on Eurosport. A lot of people have Eurosport as part of their TV package, but if you don’t, you can sign up for what is now called the Discovery+ Player. It’s £6.99 a month – which will cover the entire race – or £59.99 for a whole year (for which you would get live coverage of pretty much all the other major bike races this season and most of next season). The Discovery+ Player means you can follow the entire race on your phone, your laptop or via a TV app (or even on your telly plugged into your laptop as a workaround).

A daily one-hour highlights programme will be broadcast on Quest at 7pm. It’s a Eurosport production and is much the same as the programme they do for the Giro each year. Quest is available on Freeview and most of the other UK TV platforms, so there’s a good chance that you’ll be able to get it.

To see how your fantasy team is doing compared to the others in the mini league just visit the Velogames website and log in every evening (after the stage has finished to see updated scores).

All the best and I really hope to see some new teams in my mini-league this year (as well as all the old regulars).

UPDATE - 6 teams in so far and 2 hours to deadline if anyone else fancies the challenge.

Opps forgot to confirm we got no more entrants but all 6 teams entered had paid by the start of the race so it is £30 for the eventual winner!

Bad day for me today - lost Yates and Sivakov before the start, and Alaphillippe during the stage. I think my lead will be over fairly soon

On the time trial day I lost Hayter to covid and then like you also lost Yates next day. Also had a few not live up to pre-race hopes - my idea to spread the budget on domestics and avoid the top two pre-race favourites on GC (to spread the budget) has been a terrible experiment!

Congratulations to McBear (aka Douglas Hay ) who wins his second Vuelta in 3 years. With a nice half dozen entries this year he picks up a prize pot of £30 for this victory. 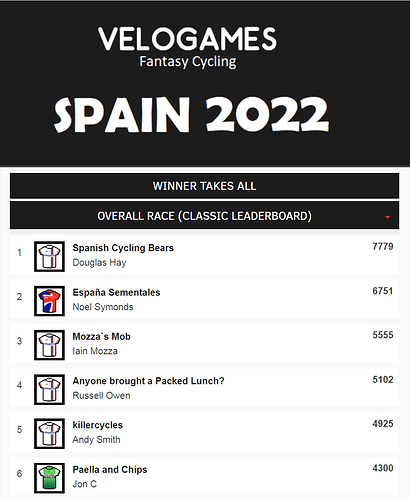 I try to run these very small stakes ‘Winner Takes All’ games on all grand tours and a few of the smaller tours too when Velogames hosts them. I will for sure be back again next year for the Giro d’Italia, Tour de France and this Vuelta a España so please do get involved - new entrants always welcome. Only a fiver (£5) entry with the ‘Winner Taking All’ every time.