Many of you won’t see this in time and I’m sorry about that but just ran out of time - NFL.com have done away with NFL Perfect Challenge and NFL UK don’t exist anymore so their fantasy football game has also gone by the by so I set out to find some new ones. I found this one which for any of you that do FPL this is almost exactly the same but for the NFL instead of the Premier League.

I have decided to copy the Prize structure from my NFL Challenge game. So this money league pays out prizes for the top 3 players at the end of the game. However, as I can’t be sure how many entrants I will get I have made the prize pay outs percentages - so the more entrants I end up getting the bigger the monetary prizes will be. My private mini league fee remains £10 per entrant and the prize pay outs will be as follows at the conclusion of the game:

If your taking part in my money league alas as I’ve set it up to start from week 1 you must join my league at least *5 mins before the first game of NFL Week 1 starts so less than 2 hours from now. Entry payment must be made before the start of NFL Week 2’s games. Non payers will be deleted from the league (unless an extension has been personally agreed with me).

As only 2 of us joined this league we agreed to make it ‘Winner Takes All’ between the two of us.

Here is the final table: 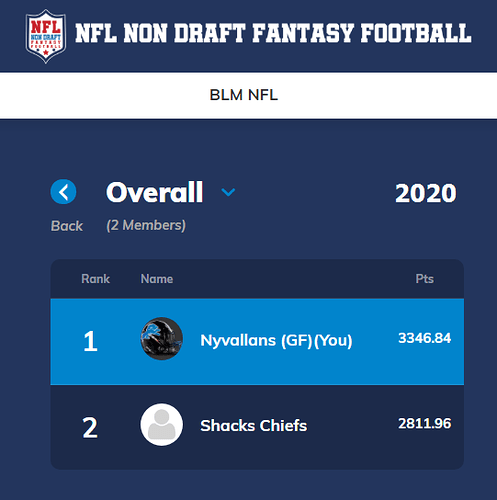 So winner and first Champion of this game is me.

Look out for this game leading up to next season as I will be running a league on it again and hope can get a decent pool size.