[1]
To any of our returning players from last year - welcome back! To any new players - welcome!
This is now the main league thread for the 2020 version of the Originals League - the seventh year of TFP’s original fantasy league with its live in-person draft day.

Are we going to crown a seventh different winner in 2020…?
It should all get underway with the draft day in Southampton… however, because of the ongoing disaster that is 2020, we’ll be taking a one year detour to an online draft. Sigh.
Drafting will start on Saturday September 5th at midday.

[3]
I am taking entries from returning managers first - until the end of May.
If you didn’t play last year, but are interested, please let me know and I will add you to the waiting list – once we reach the end of May, I will contact the waiting list in order to offer any places that have freed up.
After that, it is open to anyone!

With COVID in mind, I will list 3 different prize schedules below, to cover hopefully all circumstances

If we complete at least three full weeks of the season, but don’t finish the 13 week regular season
TOP EIGHT TEAMS: £250 each
WORST EIGHT TEAMS: nothing
(teams will be ranked on win-loss record, with points scored as a tie breaker, as at the end of the last week to be completed)

…and if we can’t even complete three weeks, I will spend all the entry fees on drink and drugs, and have a wild time at your expense. Or something.

There will be a 13 week regular season. At the end of that time, the top 8 teams will reach the playoffs (teams are ranked on number of wins - where two or more teams are level, total points scored is the tiebreaker).

Scoring will be the default taken from the nfl.com fantasy league except where noted below:

The only difference to standard scoring is: individual offensive players will score 6 points for any touchdown they score, including punt returns and kick off returns. So if Tyreek Hill catches a punt and takes it back for a score, both Hill, and also the Chiefs defence / special teams will score points for this

Waivers
As with last year, we will use WAB (Waiver Acquisition Budget) for making in-season player pick-ups. All managers will have 200 waiver points for the season, and 3 ways they can use them:

Before draft day, I will contact each manager to ask them for a private bid of 0 to 200 points. The manager with the highest bid gets first choice of draft spot, next highest has second choice etc (two or more managers with the same bid will draw lots for priority). Each team will then have the amount of their bid deducted from their 200 points, to leave their remaining budget for the season

During weekly waivers all managers can use any or all of their budget to bid for unowned players (as detailed on the nfl.com fantasy site)

During the season, all managers can use any or all of their budget as part of a trade deal (for example Manager A gives Aaron Rodgers to manager B, in exchange for Daniel Jones and 50 waiver points)

Hi Jon - as ever, love to have another go, but dependent on work situation. I’ll confirm either way before the May deadline. I’d hate to leave the league on last year’s abysmal showing! Andy.

Unusual times call for unusual methods. Perhaps a year with no injuries is a good start. Glad to be back as it appears I am on the 3 year cycle.
Drew

I have set up two Zoom meetings (the same link should work for both). The first is 20:30 – 21:30 on Tuesday September 1st , and this is just a trial run, in case you are not used to Zoom and want to check that you can get this to work properly. The second is from 11:00 on Saturday September 5th , and this is the actual draft – which will start at midday.
Neither of these Zoom chats are mandatory, if you want you can just go to Sleeper and draft there – this has just been set up to keep some of the friendly banter that we are used to on draft day

Draft bids are as follows:

A tiebreaker is needed at top and bottom, so I have assigned people riders in today’s Tour de France stage (stage 4).

Yep 12 midday UTC+1 sounds right. Bear in mind the (non mandatory) zoom chat will be opened by Al 1 hour before that, for socialising, or any last minute questions

Jon,
Thank you. Sorry you won’t get to experience the bright eyed and bushy tailed version of me tomorrow morning.
Drew

So you get an A and then it says your only expected to finish tied for 5th so how can ya draft be grade A? 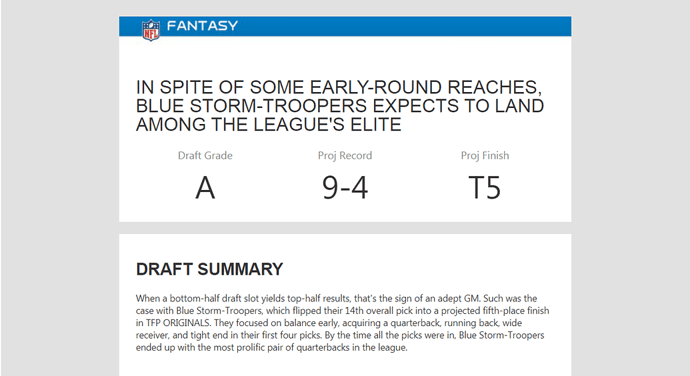