Sad to report the following strikes are awarded for NFL Week 15:

x1 Started RB - Elijah Mitchell - (SF) - who was ruled out before his teams actual game day.

Analysis: According to David Lombardi of The Athletic, head coach Kyle Shanahan said that Mitchell is expected to be removed from the concussion protocol later Friday, but the swelling the running back continues to deal with in his knee is considered serious enough to keep him out for a second straight game. Per Nick Wagoner of ESPN.com, Shanahan admitted that he’s hopeful, though “not optimistic” that Mitchell will be ready to go for Week 16, when the 49ers will be facing a quick turnaround for a Thursday night game in Tennessee. Jeff Wilson is expected to carry the load at running back for San Francisco for at least one more game, with receiver Deebo Samuel likely mixing in for reps out of the backfield as well.

(LC) Amir was close to picking up two strikes as his DL Kenny Clark (GB) was placed on the reserve/COVID-19 list Thursday, what with the 49’ers game Sunday was 99% sure to not come of that list in time to play Sunday even if he was just a close contat and not positive himself which proved to be the case but as that was not 100% confirmed to the Sunday (gameday) I technically was able to not have to issue the second strike strike but had Amir paid attention to setting a valid line-up this week (in the consoilation bracket playoffs - competing for a higher draft spot next season), he would of seen this as well as his RB ruled out nearly 3 days before game day - which he did get his fist ever strike for.

Let this be a reminder to all - any game you play with an opponent (not if ya on a bye) does carry the same strike rules as you are competiting for finishing positions which utimately decides your draft spot for next season! In this case Amir has thrown away a chance for #1 pick in next years draft when he could of won this match up and gone forwards to earning a higher draft pick position than he will now get.

Sad to report the following strike is awarded for NFL Week 16:

x1 Started DL - Joey Bosa - (LAC) - who was ruled out before his teams actual game day:

Analysis: According to Mike Garafolo of NFL Network, Bosa previously was placed on the list Nov. 16 as an unvaccinated close contact of an infected person, but after completing the required five-day quarantine, he was activated one day in advance of the team’s Week 11 win over the Steelers. The timing of Bosa’s placement on the list would have allowed him to play in Houston this weekend if he were once again deemed a close contact, but Staley’s announcement that the 26-year-old has been ruled out well ahead of the Week 16 game indicates that he tested positive for the virus. He’ll now be out for 10 days as the result of the positive test, but unless he experiences major symptoms of the virus Bosa should be ready to play Week 17 against the Broncos.

(LC) I had no way not to issue a strike for this as he was ruled out a full 6 days before his teams Week 16 game. This puts Brian on 2 total strikes. 1 more in the final week of the fantasy season (Week 17) and he could lose his place in the NBL for 2022. 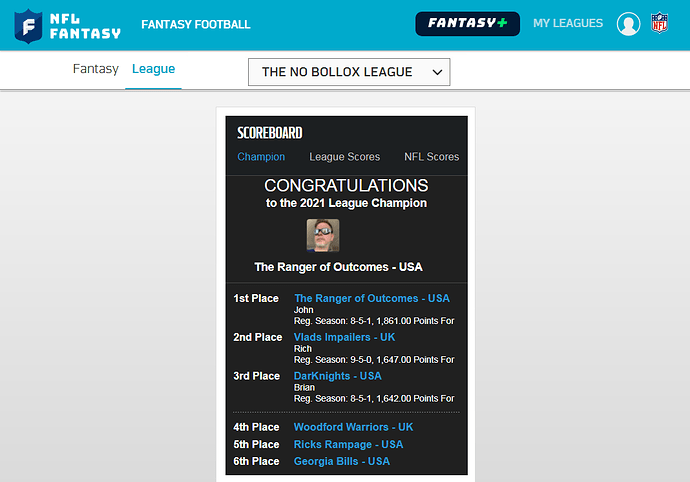 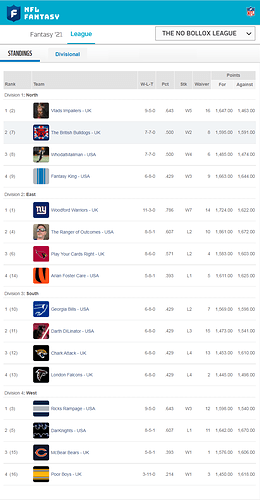 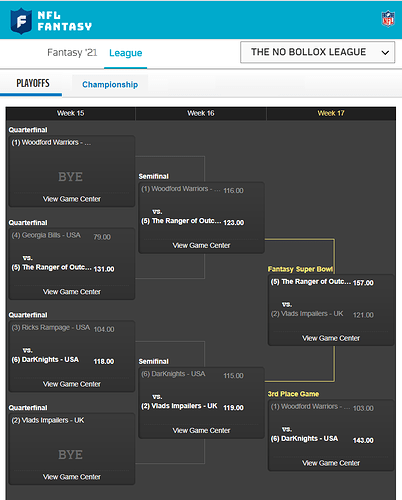 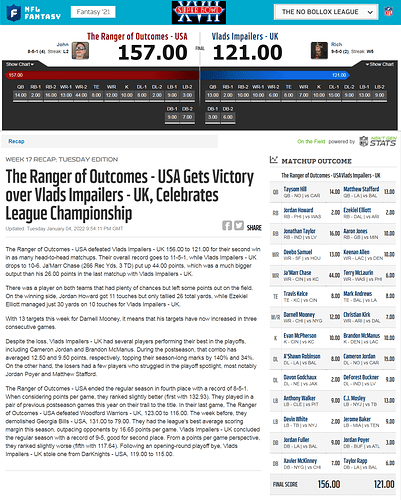 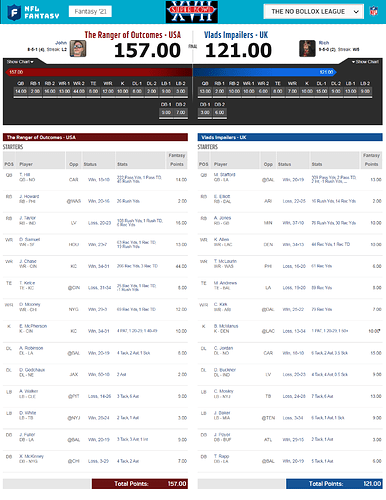 The USA puts back to back Championship wins on the board but still has a ways to go to match the UK’s amount of Lombardi trophies. 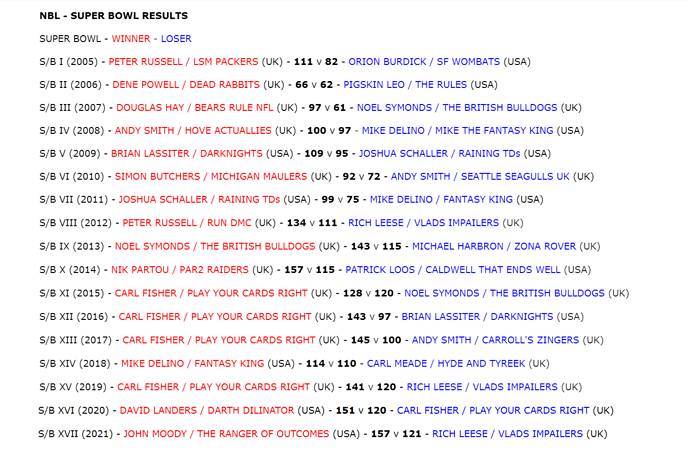 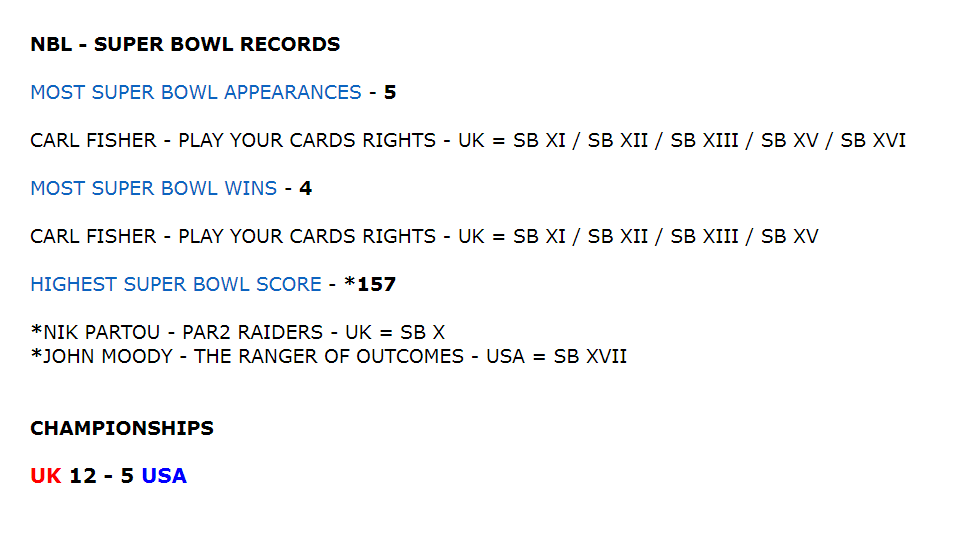 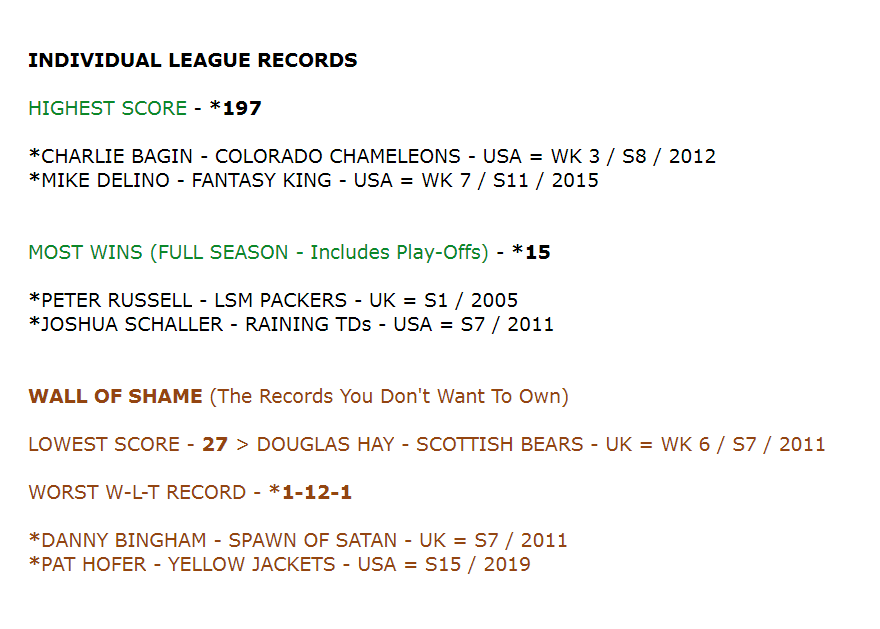 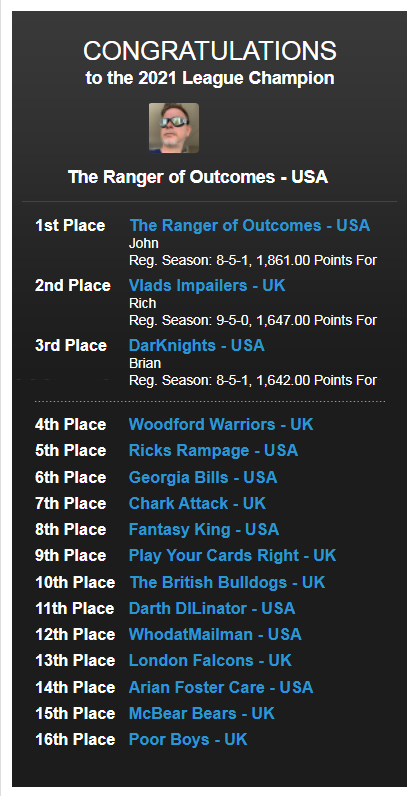