This is my newest money league (started in 2015). This is a PPR league!

I have my own Discord server where people in my fantasy leagues & fantasy games can interact with each other as well as chat about sports in general and even non sports topics. Each of my draft fantasy leagues has its own dedicated channel to discuss things about that particular league in but there is also a general chat channel and even off topic channels so anyone is welcome - more the merrier. If you like to talk about sports or fantasy sports games then you will feel right at home - NFL / F1 / Cycling / Cricket / Rugby / Soccer etc., all have their own dedicated channels: BLM Fantasy Games general chat room on DISCORD

All players that were involved last year have the automatic right of return should they want to play again. Spaces will be held until 23:59 on August 31st after which time league will be thrown open to anyone on a first to pay secures a slot basis until either league fills or we reach the live draft date & time.

As the league was not a full house last season (only had 12 out of 14 slots filled) the league is open right away for at least 2 brand new joiners. So feel free to stick your hand up, contact me and pay to secure your spot for 2022.

2021 players: - if anyone from last year is not returning this season if you could let me know this I can let more new joiners in before the end of August. So would appreciate the heads up ASAP if you know your not coming back.

This is a money league hosted on the sleeper platform with same entry fee as last year - £50 per team - so a serious proposition. The settings are mostly the same as last year as I restarted the league so all settings should carry over and be as follows: 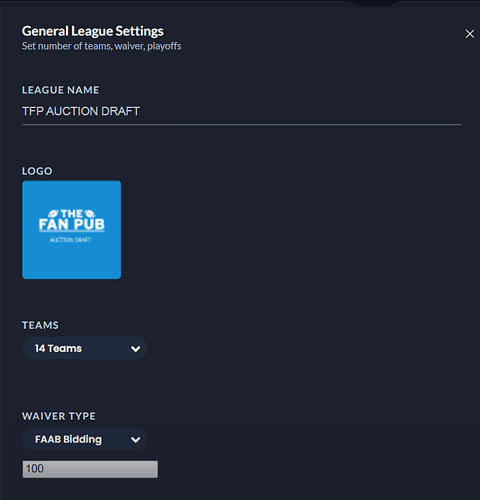 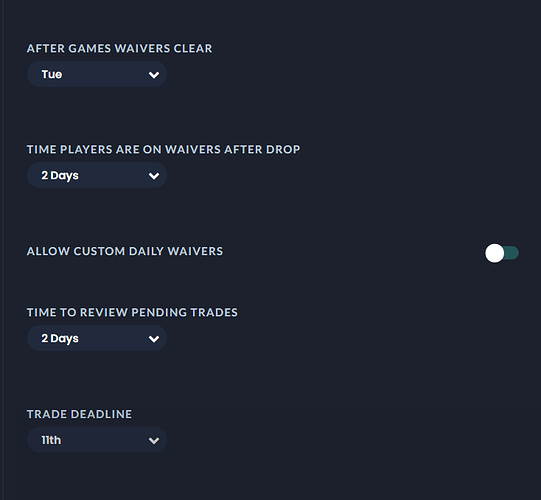 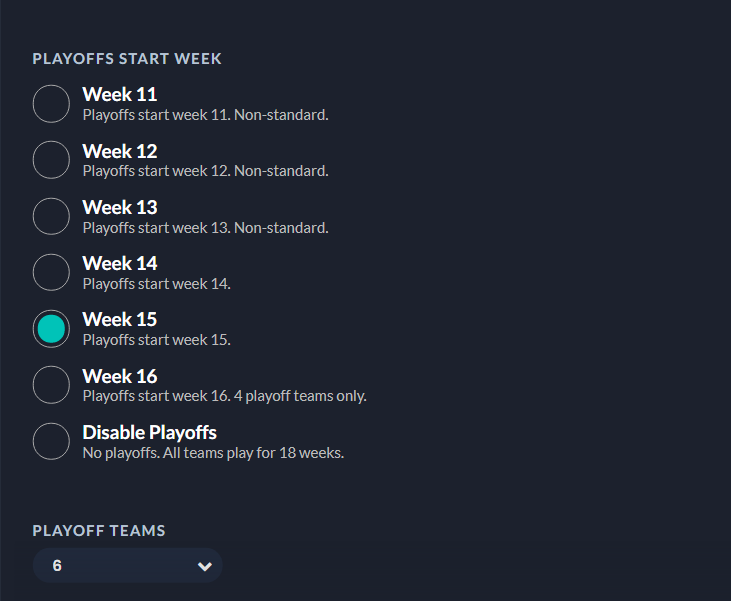 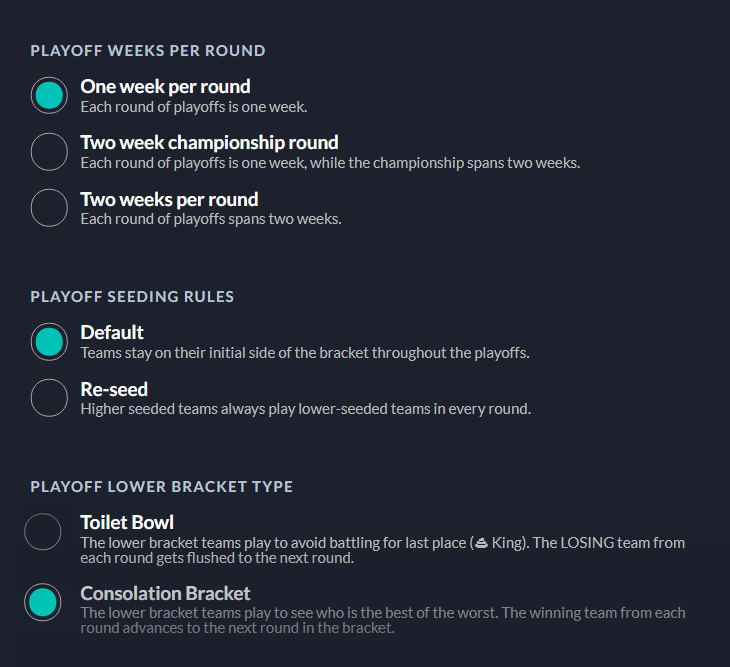 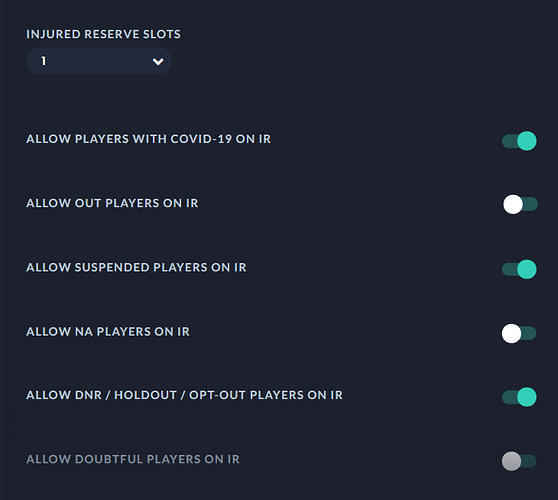 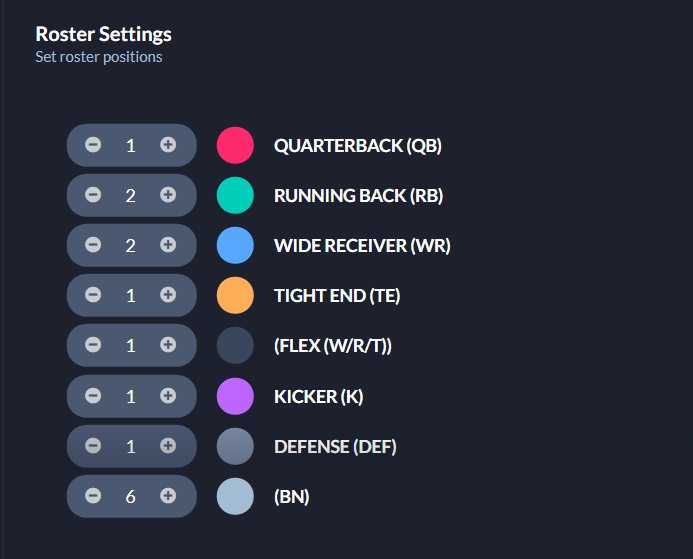 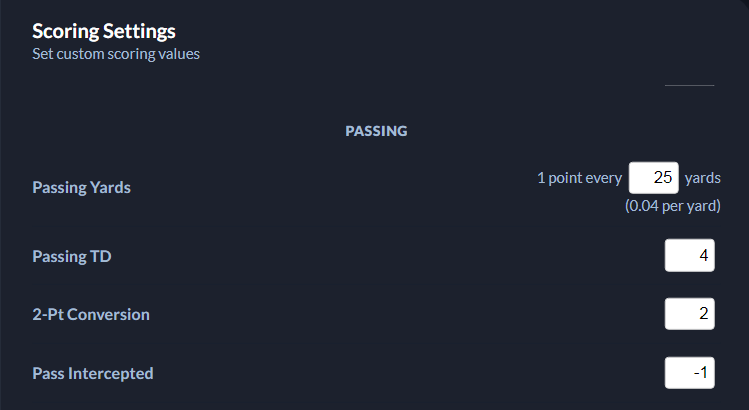 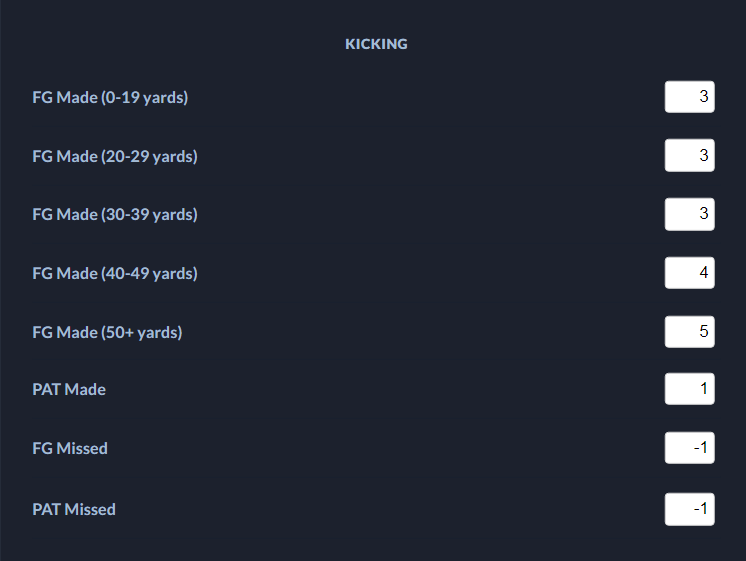 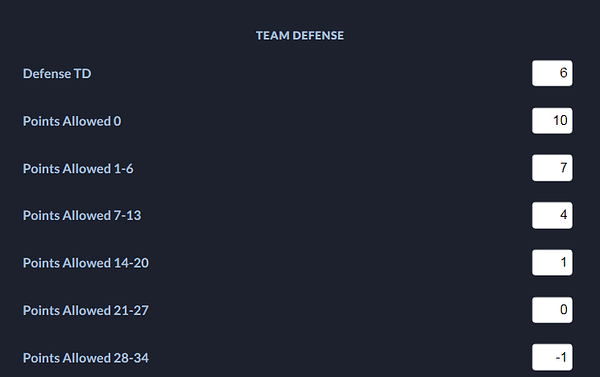 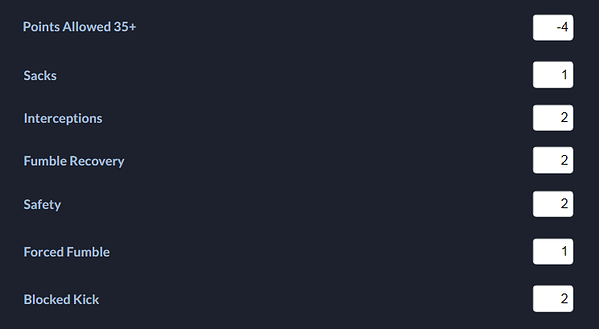 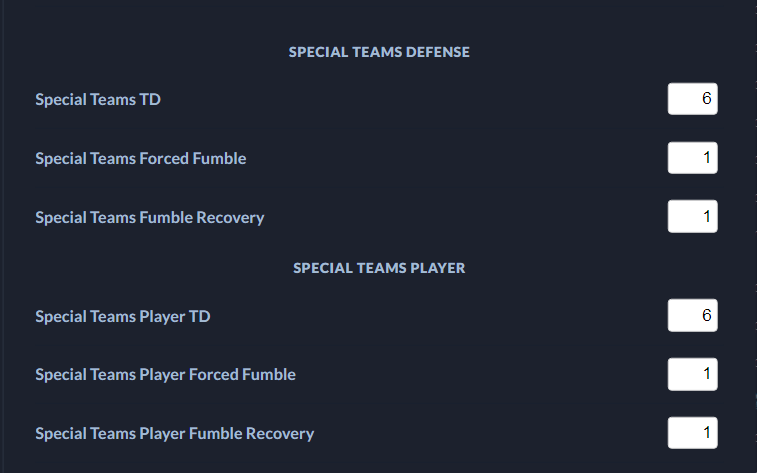 Last year I could not find this information so I e-mailed in to Sleeper to ask about tie-breaker settings as I could not find any manual choices and was sent this link about Tie-Breakers of which the main parts as far as this league is concerned are: 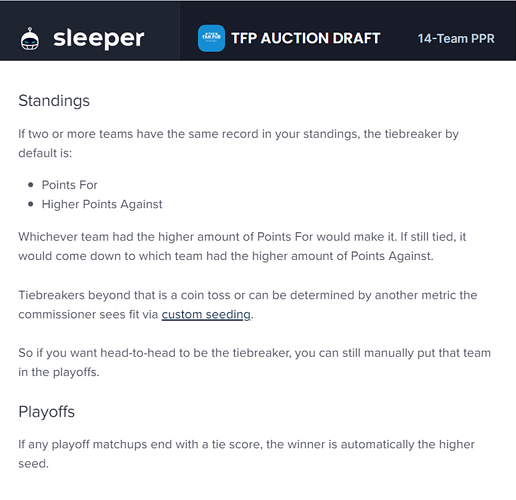 For this my second season on Sleeeper I have decided to stick as closely as possible to the settings we used last year which are Sleepers default settings with the exception of using FAAB ( Free Agent Acquisition Budget ) points for the waiver wire. Each player gets 100 points each to start the season and you use those points to bid for free agents during waivers each week.

Also I hit an issue last year that one player was really unhappy about whereby if you did well and ended up on a Bye you could not compete for the highest weekly score prize that week as my rules said you can only compete for such if involved in a game which was an anomaly as I had never extended weekly prizes into the post season before (when we played on NFL.com) so my rules had not accounted for that fact. I felt I had to stick to the rules as written last year but to address that I have switched from a toilet bowl to a consolation bracket for the lower bracket teams for this year so the winning team moves on. I will also be running a poll within the league as to whether you can compete for a weekly highest score prize even if not playing an opponent - though that could happen in one of two ways = being on a bye or having been eliminated. I feel the latter certainly should not allow you to compete any longer for a weekly monetary prize but again maybe I’m alone in this so we will debate such within the league and run poll(s) as it won’t become a factor until Week 15+.

So below is a list of those who partook last season and when they have paid they will be moved up the list on that basis and bolded - to show they have paid. After the end of August (23:59 UK time Wednesday 31st August) the league will be opened up to anyone on a first to pay takes a slot basis until the league is full (14 teams max). Only when a player has paid the entry fee will they be invited direct from the league on Sleeper to claim a spot.

When the league is filled or 30 mins before the live draft - whichever is sooner - I will re-hit the randomise button for draft nomination order but as this is an auction draft I don’t think the nomination order is anywhere near as critical as a snake draft picking leagues order is.

(This is how the rule currently stands - will be updated or confirmed after league discussion and a poll within the league before we get to postseason.)

Clarificaton - to earn a highest weeks score prize or set the highest score of the season you must be involved in an actual game - not on a bye. I wish to make it clear you have to be involved in a game that displays as an official matchup for that week for your score to count towards either a weekly or season long highest score - as that is what I use to check for each weeks offical highest score.

OFFICIAL WAIT LIST (If you are sure you want in to this money league then ask to go on this official waiting list and when a current member withdraws or opts not to return the first person on the list will be offered the chance to claim that spot for the next season and so on down the list): 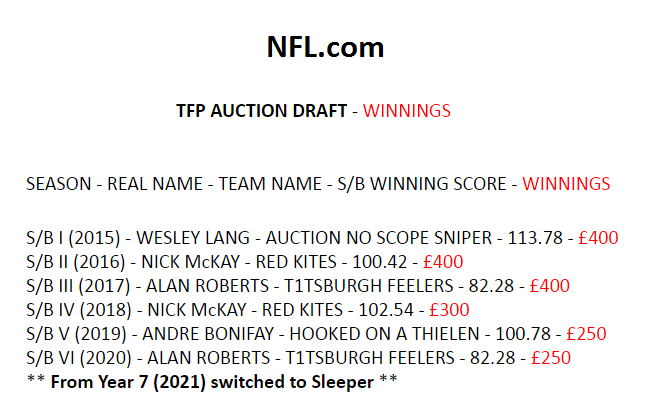 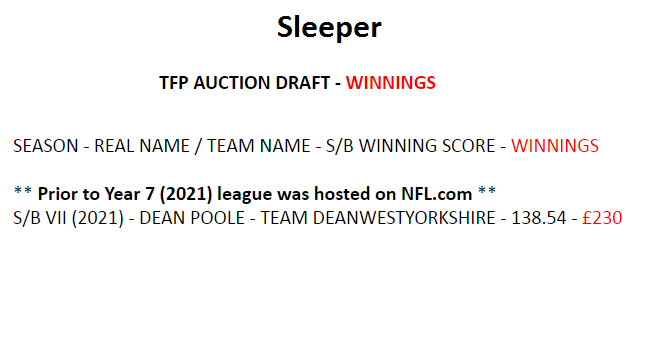 I’ll be back Noel

I’ll be back noel - paid via paypal

Just a reminder to those who have not paid yet (@ccfcchris @tala @Dean @mconabike ) your slots are only reserved to 23:59 August 31st. From 0:00 September 1st this league is open to anyone on a first to pay plays basis.

Thanks for reminder Noel, paid now.

Got it and marked you off as paid.

Okay finally we have our 14th member @DanAbrey so we are all ready to draft tonight and I can confirm prizes are as follows: 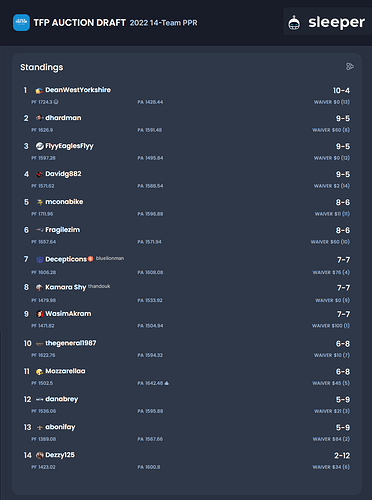 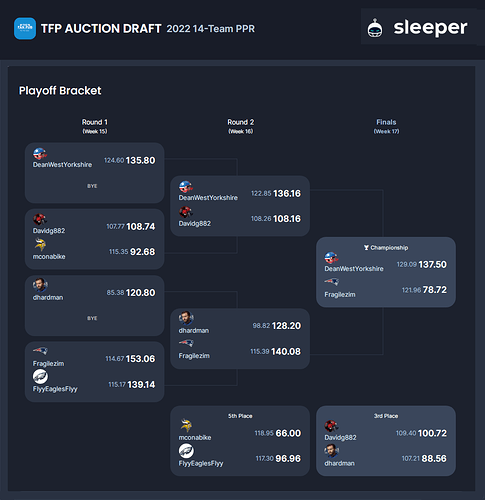 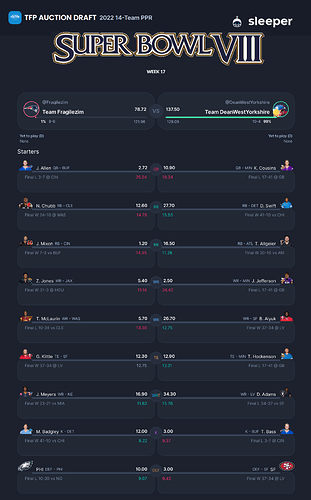 *I am wating to hear back from Sleeper as not happy the league seems to have lost all player stats for games earlier in the season and in fact has many starting slots now showing as empty which is not right as teams no longer match their overall team scores!

Thanks setting this all up and running this Noel. Been another fun year.
And thanks for sending through my winnings!!