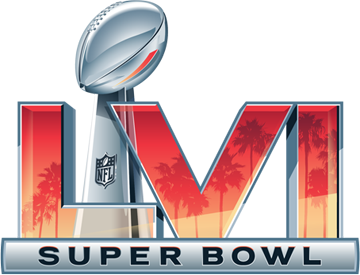 It’s back & bigger than ever!

This year, for a time I was contemplating if I should pass up doing a squares grid as it can be a big headache and a huge risk to my pocket but with just 3 games left of this incredible post season and the fact I have more fun running this game than I do losing on my real sports bets with bookies I have decided to take the challenge on.

Just this year have decided to do it a little bit differently. I’m still running it online (digitally) and as in past years the Super Bowl Squares grid can be viewed online (link can be found here):

So, this is how it works - I have a grid with 100 squares on - each one costs £10 @ square and total prize fund is £800. I don’t hide anything so yes as you can see 20% of the money collected in goes to the house/me - assuming I sell out the grid in full which is by no means a given. However, I do guarantee the prizes and so take a substantial risk as if I cannot generate the sales then I can be seriously out of pocket as I will be funding the prize money from my own pocket. I stand by my games and hence guarantee the prizes - no quibbles. So, for this reason, as well as all the time spent making the game grid up on Google Sheets (quite a challenge as I am not computer literate), typing out this rules thread to try and explain how the game actually works along with the added risk of actually losing money I feel it’s only right to mitigate that with a 20% house edge from the squares game.

Now that’s out of the way let’s move on with the game mechanics - I know some of you might not like to read loads of type so here’s a link to a video of me doing my best to explain how the game works: 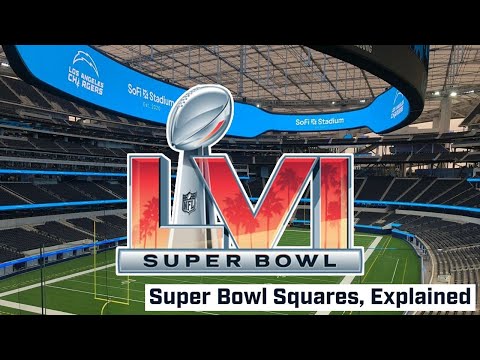 This year what I have decided to do differently is I will not number the grid until either I have sold all the squares or more realistically on the eve of the Super Bowl itself - so the Saturday night / 12th February, (Super Bowl is Sunday night 13th February). I will do this on video so everyone can see everything is above board, open and transparent. The video will be hosted on YouTube and a link posted to it on the TFP forum website.

Just so you know it’s pure random luck - there is no skill in this game whatsoever.

(The following is also explained in the video I made - link above).

Now as I will not see most people in person have adapted the way I run my squares grids as follows to make it random - I have numbered every square on this grid from 401 - 500. That is to match the raffle tickets in books I bought from Tesco’s for past games. The reason for the high numbers is I am working through the tickets in the raffle books but it’s still just 100 squares (numbers) in total.

I have placed all the raffle tickets in a bag.

Now this is the clever bit, anyone can buy Squares remotely (without seeing me in person) as when people pay I draw them raffle tickets from the bag and enter their details on the online grid for that square the raffle ticket matches.

Then on the eve of the Super Bowl or when the grid is sold out - whichever is the sooner of the two, I will randomly number the coloums and rows of the grid. I will do this in a video which will be uploaded to YouTube and a link to it posted on this thread.

However, by using the raffle ticket system means I can still sell any remaining sqaures in the last 24 hours leading up to the Super Bowl if I have not sold the grid out prior to the numbering of the grid, as it will still be random luck - as people still cannot pick their own squares but will be allocated them based on the raffle tickets drawn. The raffle tickets decide their squares. The raffle tickets are what still make it random as to what game numbers you end up with.

In the video I will make, (most likely on the eve of the Super Bowl unless the grid sells out before then). I will number the grid randomly by using playing cards - I will do this by taking an Ace (representing 1) thru to 10 (representing zero) from a pack of playing cards - I shuffle them up and then start to turn the cards over revealing them to my webcam. I will draw the AFC teams numbers first - so across the top of the grid (the columns) in the order the cards come out. I then repeat this process (for the rows) which represents the NFC teams numbers (down the side). I then upload the video to YouTube and post it’s llink in a reply on this tread below, so anyone who wants to watch the video can find and view it. I also then go and number the grid up on Google Sheets so from that point onwards everyone can know their actual numbers - and everyone elses to.

Now I can start selling squares to both people I see in person and people I do not. No one gets to pick their own game numbers on the grid - they select a raffle ticket from the bag - or a proxy does this on their behalf (most likely me but sometimes a personal friend or acquaintance). The raffle ticket corresponds to the same numbered square on the grid and that becomes their square. I enter their name in that square in the online grid on Google Sheets. If I know their TFP forum name that will be used on the online grid (but will also keep a separate note myself - on a physical sheet - of who each entrant’s real name is so I can pay out the correct winners after the Super Bowl itself).

I hope having this digital grid online should make the game more fun for everyone who partakes as if you follow the game scores live during the Super Bowl you can check the grid online and see who’s square it’s currently on with every change of score in the game - rather than just knowing your own numbers needed to win. Any unsold squares are house squares - only fair as I am basiclly buying every unsold square by guaranteeing the prizes. Using the raffle ticket system insures no one gets to pick their squares numbers - it’s all still random luck what numbers you get and again is down to the actual scores in the real game itself at the predesignated winning points (end of 1st, 2nd and 3rd Quarters plus the final games result) - so even more luck as to which squares actually win.

The grid has a 100 squares, of which I will have randomly numbered the columns and rows by using playing cards (explained above) before the Super Bowl.

Across the top (when known) goes the AFC team (columns), down the side goes the NFC team (rows). The scores at the end of the first 3 quarters and the final result of the game (to cover the eventuality of Over-Time) decides the winning squares. Every score in the game changes the square it’s on and whatever square it’s on at the four predetermined points of the game (end of the first 3 quarters and final game score) wins the prize for that point.

Now this is how the winning squares are determined.

If the score at the end of the first Quarter is AFC team 10, NFC team 3 you would go to AFC column zero (0 - because you just take the last digit of a team’s score) and NFC row 3 and where the two meet on the grid is the winning box for that Qtr. and this is how it works for the whole game. In effect (and it has happened) the same square can win more than one prize.

I first encountered this game on the champ train from Chicago to Champaign, Illinois the season the Bears played at the University of Illinois stadium while Soldier Field was being renovated (2002). I got them to teach me how it worked as it was nothing like what we run on our sports here in the UK. There they do it in office pools and in bars or what have you on regular season games - or any game if there’s enough punters - however they do it for bigger bucks $25 or $50 a square. NICE

Payment & prize payouts - anyone I don’t see in my day to day life - so 99% of all TFP forum members I ask to contact me by PM and we can discuss ways to pay (usual SP for those of you that know the score). Pay out of prize winnings will be back the same way towards the end of Tuesday or sometime on Wednesday post Super Bowl once I’ve sobered up.

So, if after reading all that you are willing to have a go, I urge you to buy squares sooner rather than later so I can sell the grid out in plenty of time to have the online version fully completed before the big night itself. When you contact me to enter if you’re a TFP member I would greatly appreciate you telling me your username on TFP forum as I will use that on the online grid when possible (as others will more likely know you by your username I think). However, on the physical grid I keep I will use people’s real names.

That’s it - now it’s over to you peeps - you just have to ask yourself ‘DO YOU FEEL LUCKY’ ?

Here is a video of me randomly numberig this years Super Bowl Squares Grid: 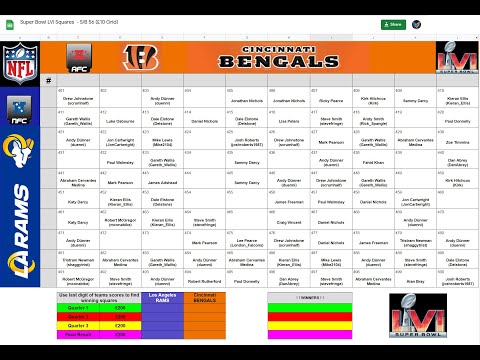