Before applying to join this league please view the settings and make sure you are happy with them as I don’t plan to change them. I like continuity so I stick with the settings from the leagues inception in 2006. Which means this league is a 12 team league, is not a points per reception (non PPR) nor fractional scoring league. Rest of the leagues settings can be viewed here: SMTM… League (89661) Settings

DISCORD Channel link: Show Me The Money on DISCORD - chat room
Alas not many people took the chat rooms option up for my leagues but there still there should anyone want to lead the way - encourage other GM’s to join you in chat - each of my leagues has its own dedicated room to discuss things about that particular league but there is a general chat area for anyone who partakes in any BLM fantasy games I run here: BLM Fantasy Games general chat room on DISCORD

OFFICIAL WAITLIST (If you are sure you want in to this money league then ask to go on this official waiting list and when a current member leaves the first person on the list will be offered the chance to claim that spot for the next season and so on down the list): 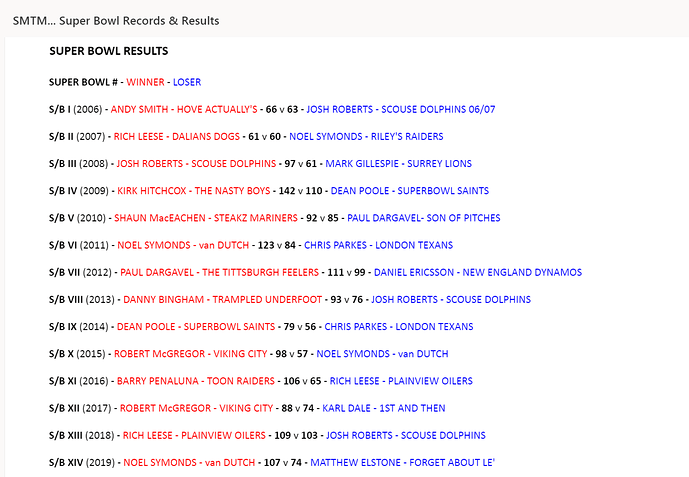 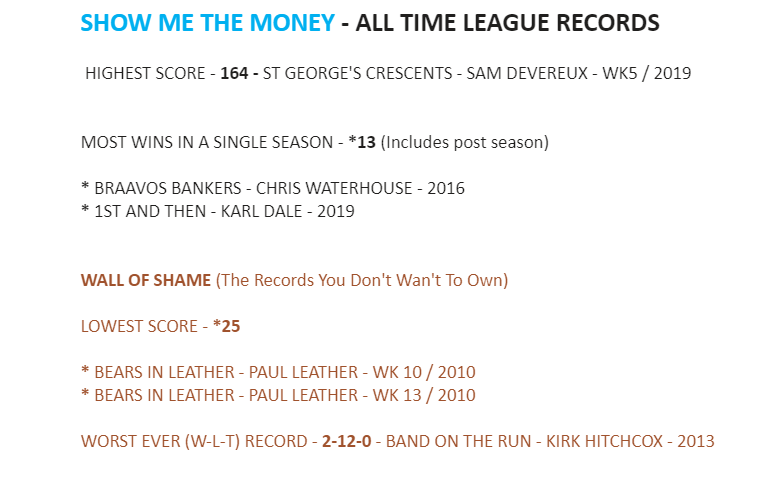 I am in too

Scouse Dolphins are back

Hi Noel, I’m Matt’s brother can you add me to the waiting list for this please

Sure can. Can you tell me your name please (first and surname) and I’ll put you on the list. I think it’s Dale Elstone but just wish to be sure. cheers. Also PM me your e-mail address for my records and to invite you to league if space comes up. Cheers.

Plainview Oilers are back

Add me to the list please Noel, doubt i’ll get in but just incase

Sorry Mike you wont make it in this season but I can put you on the waiting list and you’d be first invited next year if a space pops up as the 2 guys on the waiting list right now I’m about to invite in for this year to replace the two guys who have not gotten back to me from last year nor confirmed here they are playing this year. My deadline for that (saving spots) was midnight Monday so to be fair to all and make sure league drafts it now opens up to those on the waiting list.

Thanks Noel, put me on the list please mate. Cheers

Already done buddy. Also I have plenty of other NFL games to keep you and everyone else busy this season if people just decide to partake…

Okay all we are now full for 2020 and so I will soon - well before draft - make the video for divisions make up. Please all make sure to have paid before draft - I know many of you are waiting to pay for all games of mine your doing in one go which I appreciate. FTI I hope to have more and more games going up each day - it’s like a full time job I enjoy - but just without pay unfortunately.