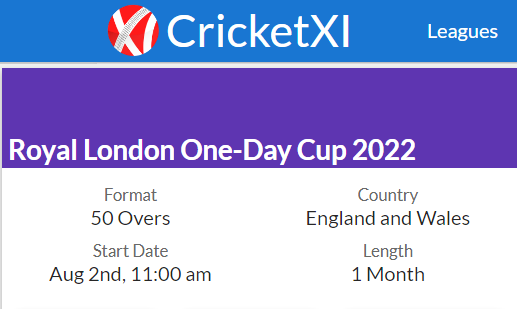 Due to requests from some of my existing fantasy CricketXI players I have decided to start running small stakes fantasy leagues on the Royal London One-Day Cup.

I’ve set up 2 leagues - one is an open league where you’re all on a ladder based on your total fantasy points scored. The other is a head-to-head type league where you play one other team from the league each round and you win, lose or tie. A win is 4 points, a Tie 2 points and a loss 0. That decides your position in the league with tie breakers to split teams such as points % (difference between points scored and points scored against you). Also, in the head-to-head league the top 6 teams will make the finals (and play across the 3 final rounds).

To make a little bit of interest and a prize for the winners’ skill (or luck) I am making both leagues £5 each to enter and both leagues are ’ Winner Takes All '.

People are welcome to join one or both leagues and I hope people will feel £5 is not much at all and give these leagues ago. The game starts (Round 1) 11:00am (UK time), 2nd August (so Tuesday morning a week from today) The head-to-head league requires a minimum of 4 entrants (so 3 more other than myself) to run. Also, if we end up an odd number of teams in the Head-to-Head league the site will put one team each round on a bye.

Usual method for payment - if you don’t know what that is (because your new) or have forgotten just PM me from here (the TFP forum) and I will respond with the low down.

Finally, I must point out due to new players joining previous CricketXI money leagues of mine then not making contact with me and not making any attempt to pay the internal entry fees I now have to be stricter. So, any teams not paid for I will delete from my league just before tournament starts - without notice! This is because I only have the ability to delete teams before a game starts on Cricket XI so I am not having any teams included that are not paid for in advance of future tournaments starting.

All game rules, player scoring, trades etc., are the websites and can be found under the HELP tab on site but to aid you here is a link: (CricketXI) Royal London One Day Cup 2022 / HELP

Greater than Hundred - Adrian P - I don’t know who this is - please make contact to sort out entry fee.

Unfortunately despite my best efforts to contact this guy on Facebook I’ve been blanked - he’s a welsher!

Will see about getting him removed and hopefully if he joins any future leagues of mine will move to boot him right away.

Yay - finally missing player got back to me on FB - was on holiday and slipped his mind.

Any way I can now confirm everyone has paid up so prizes are as follows:

best of luck all.

How will the last 6 in U2’s format work? Thanks

It’s not last 6 but last 4 - the site has a display error where that cut off line is displayed - I did contact CricketXI on Twitter at start of game and was told it was to close to season for him to patch that error in the display.

If you read rules on site - as I did - it does say top 4 - that’s why I contacted dude to say why does line make it look like Top 6 and that’s what I got told.

In fact I’ll go screen shot my contact about it: 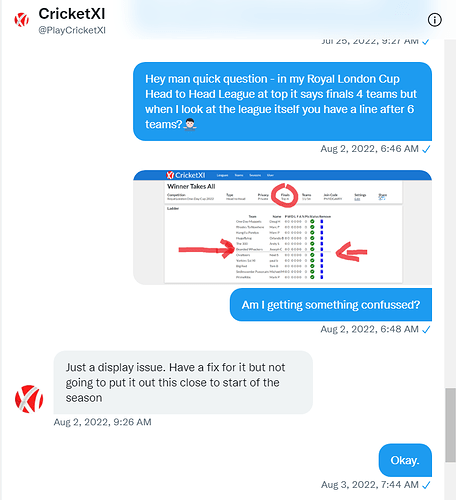 Ok thanks
As the league is h2h do we play each other or is it just best overall scores?
Do we play in all 3 rounds - not sure how that works in h2h
Can’t see anything in rules to indicate

…but I had hoped this would have been confirmed by the start of the round! 20 minutes into the games, and still no fixture list.

I thought only 4 teams qualified, seems to be top 6 as the fixtures have finally been put up on site.

Bunch of transfers for no reason then…

Hey guys get on him at Twitter - only way we get him to pull his socks up is let him know this is not on - he’s putting up more and more games which is all well and good but if he’s a one man band as I think he is, he needs to focus on the bigger games first rather than spread himself to thin!

His response is
“Apologies, I thought that it was in the rules as they were the same as last season, but it isn’t stated clearly. This will be corrected for future seasons.”

All well and good but for those of us that did not play this game last season (like myself) we have no idea how it worked and I appreciate it’s a lot of work plus he don’t charge for his games so I try to cut him some slack. However he does do more and more cricket games - The 100, women’s cricket, very small tournaments like some Dutch one and PPL but didn’t do the CPL last time.

My preference for running my little WTA games on is all UK tournaments (excluding the 100), England tours / series, World Cups / Champions Trophies and the major T20 tournaments round the globe so CPL, IPL, T20 Blast and The Big Bash.

A big Congratulations to both Thomas Bryan - who won the Open Classic ladder style league and Andy Smith / Rick_Spangle who beat Mark Pearson in the final of the Head to Head style league. 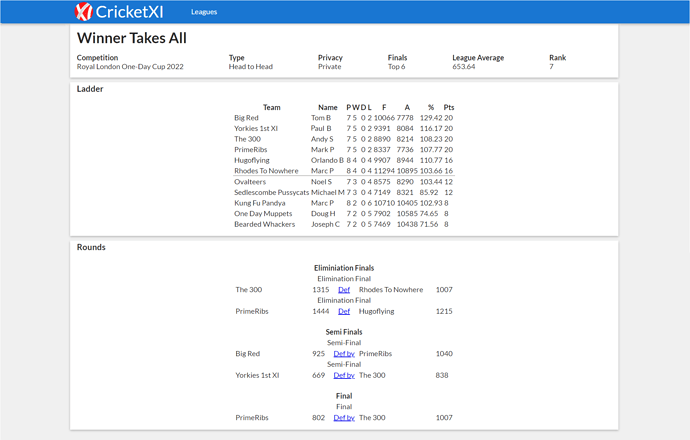 I hope all who played had fun and I may run these small entry fee leagues on this game (RL ODC) again next year though was very disappointed how many players were missing or not available throughout the tournament due to both international commitments and the abomination called The 100!

Well done to the winner. Good fun and a great way to retain an interest in the competition

Don’t miss the T20 World Cup game on the same website I have set up leagues on, full info here: