6 or less entries = Winner Takes All - meaning all the entry money will go to the winner.
7+ entries = 1st & 2nd place prizes - worked out and advised by me once number of entries is known.

All you have to do is pick a team of players from the list provided below (see link at end of this e-mail) within the budget of $57 Million. The system is simple. You must select a Head Coach, one Quarter-Back, two Running Backs, two Wide Receivers, one Tight End, a Kicker and a Team Defence.

Anyone who scores a touchdown gets six points, just like the real thing. If a *Quarterback throws a touchdown pass he also scores three points. If anyone returns a fumble or an interception for a TD then the Defence scores six, they also score two for a safety. Kickers get three points for a field goal and one for extra points (PAT’s - Point After Touchdown‘s), while anyone scoring a two-point conversion scores two points. If a *QB throws a two-point pass he scores an additional one.

Also, this may be different from First Down’s old game but to clear up any confusion any offensive player who scores a TD while playing on Special Teams or Defence will also get credited the points for any TD they score as well as the Defence/Special Teams Unit as a whole. Something to bear in mind. Example a WR also doubles up as his team’s kick/punt returner and takes one all the way back for a Touchdown - he will earn 6 points himself for the T.D. but at the same time his team’s Defence will also earn 6 points… nice if you have both the scoring player and the team Defence!

Entrants will be sent an e-mail with a link to a spreadsheet on Google Sheets website listing everyone’s teams entered as soon as the first playoff game starts (9:35pm GMT Saturday January 15th). I will endeavour to have all team line ups entered onto this spreadsheet ASAP after this deadline so you can see everything is open and above board, as well as allowing you to follow the playoffs more closely on TV, Radio and via the internet, if you so choose. (You’ll even be able to work out the team points for yourself should you like to). I will also advise at this time the number of entrants and projected prize money pay-out(s).

Please help me by putting ‘ NFL FG PLAYOFFS Trade ’ in the subject header line. Updated team line ups will be made on the Google Sheets spreadsheet. Each trade deadline is the start of first game of each round and by midnight 12th February - going into Sunday 13th February for the Super Bowl itself. This is because I usually go to a Super Bowl party so to take the pressure off me and to let everyone know each other’s final line ups before the Super Bowl starts the deadline is the night before to give me time to get the spreadsheet updated with people’s final trades. TBH the earlier everyone gets their final trade in to me the better as it really helps take the pressure off me.

Alas it’s taking me time to type out all the late entries I have in many of my games so am posting my team here before start of first PlayOffs game for transparancy: 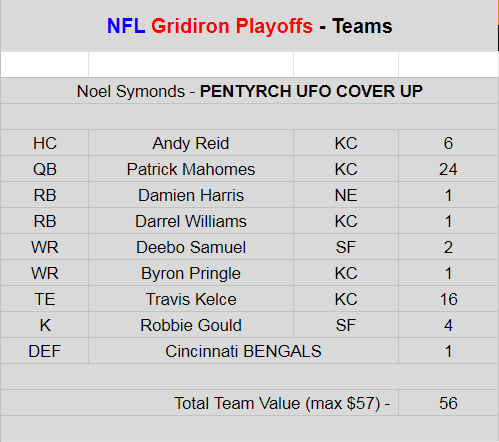 Okay all teams are now live on Google Sheets (follow this link):

Alas we only got 9 entries this year. So as per rules there will be 2 prizes which are as follows:

Thanks for taking part and remember you get to make 1 trade after each round.

All teams that sent a trade in are showing live on the team entry Google sheet (link in previous post) - but for transparancy am posting my team here to before start of first Divisional Playoffs game. 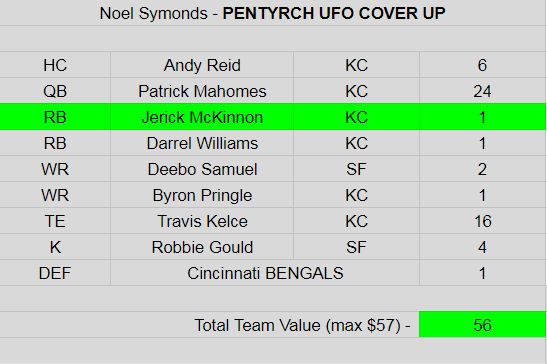 New team line-ups are now visible for the Championship Playoffs (link in earlier post) for those who submitted trades to me.

My team is there to but as I posted on here last round might as welll do same again:

Good luck all, enjoy the games.

New team line-ups are now visible for the Super Bowl (link in post #3 in this thread) for those who submitted trades to me.

My team is there to but as I posted on here last round might as welll do same again: 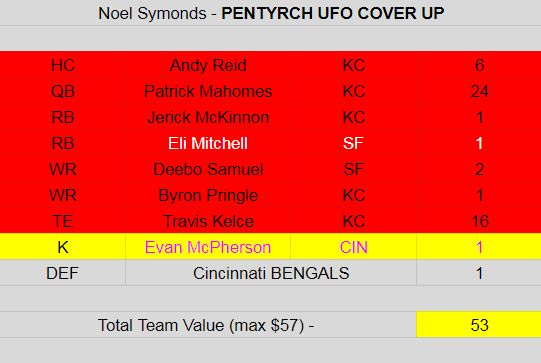 Good luck all, hope you enjoy the final game of the season. 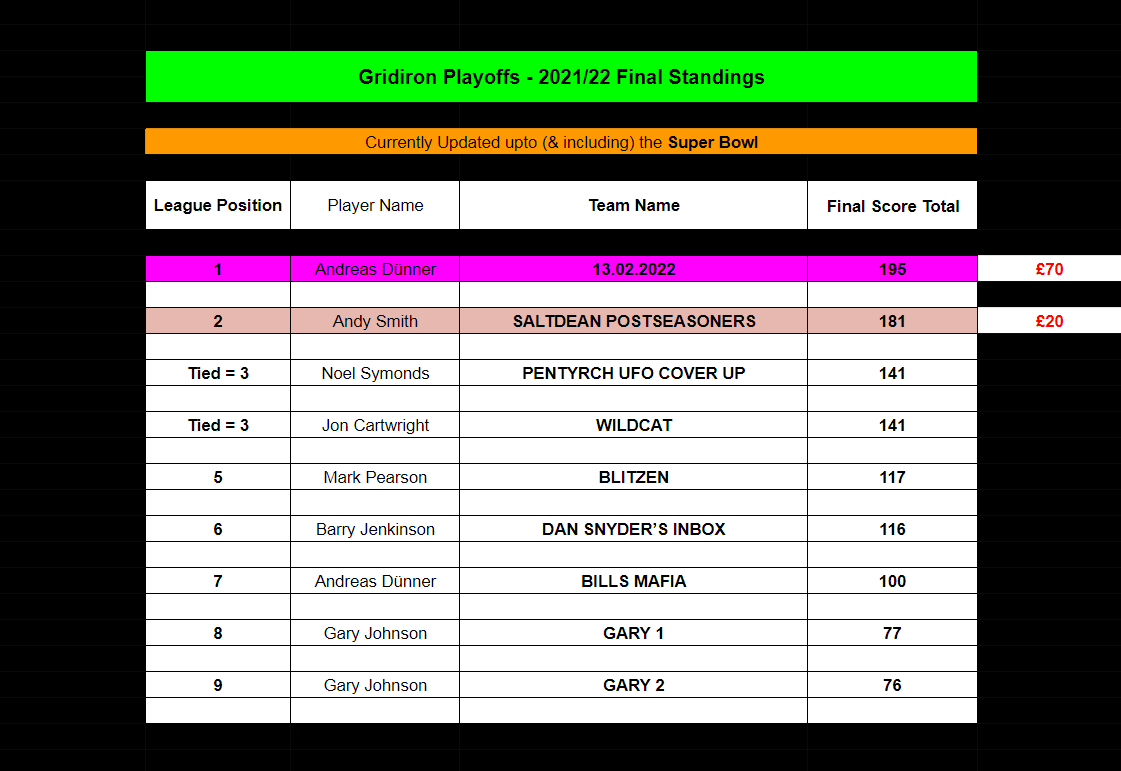 So a big well done to Andreas Dünner (duenni) who cleans up this year banking the first prize of £70. Andy Smith (Rick_Spangle) comes runner up doubling his entry fee and collecting £20. I will now up date the Winner History for this game here: