However unlike that game this version runs for the entire NFL season (from September 9th, 2021 thru to the Super Bowl final on February 13th, 2022).

Any player not listed you can request and I will add them. I have tried my best to update all players to their current teams if you spot any mistakes, please inform me so I can correct them.

You must stay within the budget of $57 Million .

Just create your team by copying into a PM (Private Message) the form at the end of this post and filling it in with your selections and send it to me before the deadline which is the start of the first game of the NFL regular season - (Thursday 9th September). The system is simple. You must select one Quarter-Back, two Running Backs, one Tight End, two Wide Receivers, a Kicker, a Head Coach and a Team Defense.

To mirror the change in the real NFL of a few seasons ago if PAT’S are blocked and returned, they earn 2 points so this will also apply to the relevant fantasy teams Defense.

Additionally in this game (different from how First Down’s was) Defenses will incorporate special teams plays - so all punt and kick-off returns that go for a TD will earn 6 points for the relevant Defense. Furthermore, the individual player on a special teams play that scores will also earn the same number of points as awarded to the Defense. So, for instance, if you have a WR, RB or TE also on return duties and he takes one to the house not only will the Defense score 6 points he will individually himself to.

Your Head Coach will score three points for every game his team wins and one point for any game that finishes as tied in the regular season. However, Head Coaches will score 6 points for post season wins.

Also Head Coaches will earn a bonus of 6 points if their team makes the playoffs. This bonus is doubled (to 12) if your coach is your original HC and you have not changed him at all since the commencement of the game. Only the HC on your teams’ roster at the end of the regular season (WK 18) qualifies for the bonus points (if applicable) and these points are added to the Head Coach’s score for Week 18. Also, a further bonus of 6 points is awarded to each Head Coach that wins their division - this bonus is awarded and applied to all applicable Head Coach’s in Week 18. (However please note - there is no doubling up of this bonus for original HC’s).

Finally, points will be doubled for the final itself (the Super Bowl).

Every entrant will be sent a link to a Google Sheets spread sheet listing everyone’s teams between the start of NFL Week 1’s first game and the main tranche of games that start on the Sunday (September 12th). This is so you can see everything is open and above board, as well as allowing you to follow the season more closely on TV and via the internet, if you so choose. (You’ll even be able to work out the team points for yourself should you like to). My team entries will be sent by e-mail to every entrant at kick-off of that first Thursday night opening season game to show there is no funny business.

On the Google Sheets ‘Gridiron Game (Season Long) 2021/22 - Entered Teams’ spread sheet each teams individual player scores will be updated weekly so you can see how you are doing compared to your rivals. This is also where teams will be updated after each trade window.

TRADES - You can trade up to three player/positions at each trade window. Your team’s value still cannot exceed $57 million after you have traded. You do not have to trade; your team can remain the same from start to finish. However, you must submit your trade(s) to me before the start of the following weeks games by e-mail or PM from the TFP forum. Please make sure you put NFL Trades in the subject header line. Updated team line ups will be entered on the Google Sheets team entries page and be viewable to everyone after each trade deadline.

There are 3 trade windows during the season, they are:- 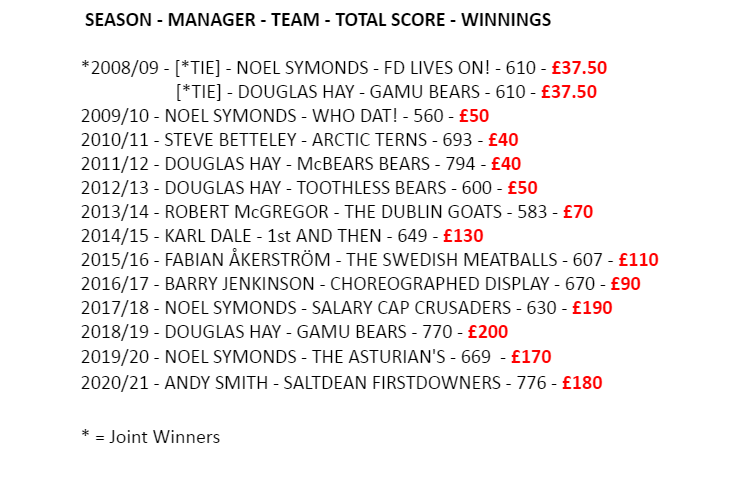 If you don’t see me in person and don’t know the score regarding payment then please contact me for payment information. You can do this by Private Messaging (PM’ing) me from here (TFP forum).

Okay as I still havent typed out all entried as yet so no one says I cheated am posting my teams before start of first game of Week 1.

I have done 2 entries myself this season: 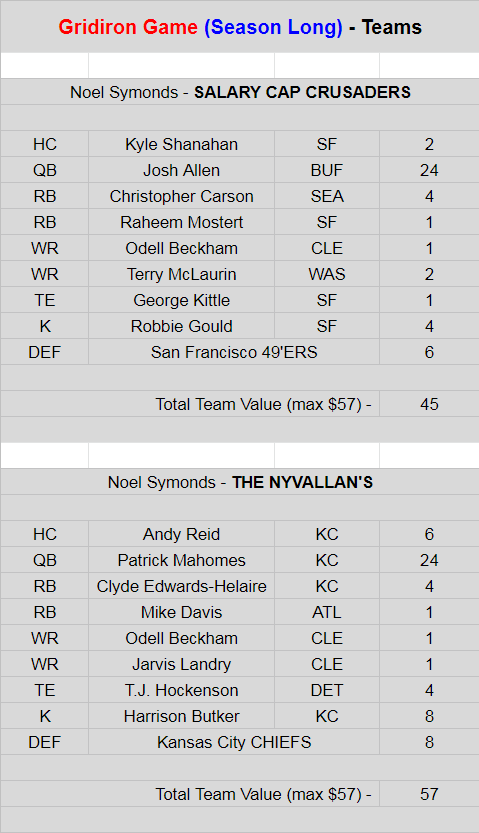 next to entries when paid. Please pay for teams before the main slate of NFL Week 1 games start on Sunday but if not before the first game of NFL Week 2. Any welchers will be on a 1 years ban from all money games I run, named and shamed here on this thread and entry/entries deleted.

The above link will take you to every entrants current team line-ups on Google Sheets, with the individual players weekly scores along with each teams trades (at the 3 trade windows) which will be updated weekly throughout the season.

I can confirm everyone has paid and this year the prizes are as follows:

Trades must be submitted to me by e-mail or PM from here (TFP forum) before the start of the first game of NFL Week 7 - which is scheduled to be TNF (Broncos@Browns) 8:20pm US ET (1:20am Friday BST).

My Trades for trade window 1 are as follows - posted here before start of 1st game of NFL Week 7 to prove there is no funky business from me. All other entrants trades will be released ASAP and before main slate of games on Sunday at the latest. 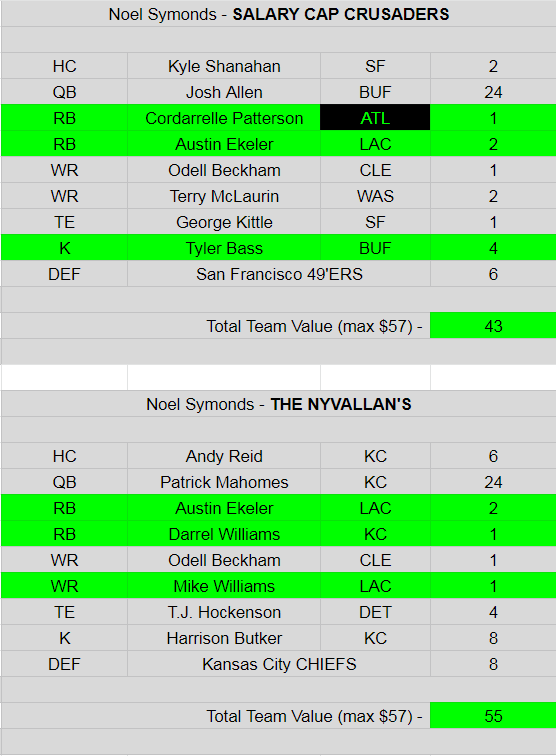 I use fantasy game websites to check a players official position catagory, This season I used Sleeper and they have Cordarrelle Patterson (ATL) listed as both RB/WR eligible meaning he can be used in either slot. Therefor in a highly unusual scenario he appears on my players list twice as both a RB and WR at the same price of $1m. You can have him in your team in either position but not both at the same time - after all there is only one Cordarrelle Patterson. I am not sure I have ever had a player listed twice on my list in differing player positions in the very same season. It is a rairty.

If you wish to swap his position from RB to WR or vice versa it will take 2 trades - one to take him out for another player in the position you have him in currently and then another trade to bring him back in to your other position he is eligible for replacing a player you currently have there.

Just wanted to clear this up as at the st trade window many people brought him in and one person actually went the WR route.

Trades must be submitted to me by e-mail or PM from here (TFP forum) before the start of the first game of NFL Week 12 - which is scheduled to be the first Thanks Giving Day game (Bears@Lions) 12:30pm US ET (5:30pm GMT) on Thursday 25th November.

My Trades for trade window 2 are as follows - posted here before start of 1st game of NFL Week 12 to prove there is no funky business from me. All other entrants trades will be released ASAP once deadline is reached (start of 1st game today - Thanks Giving day). 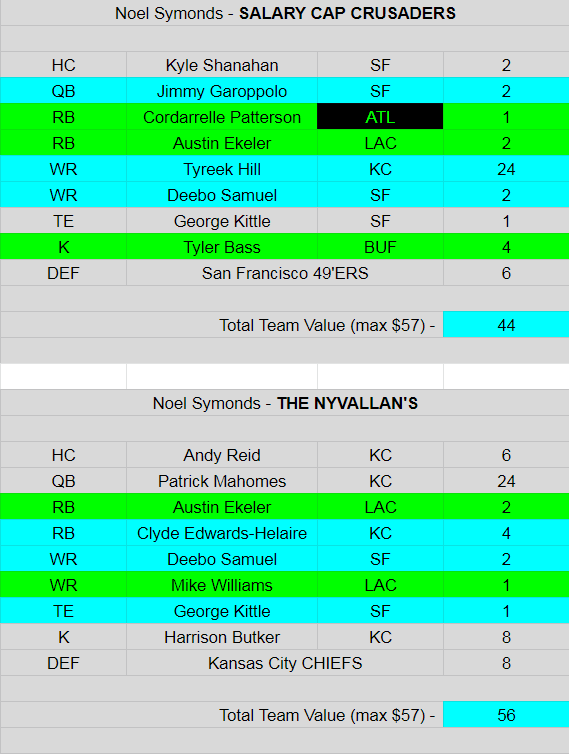 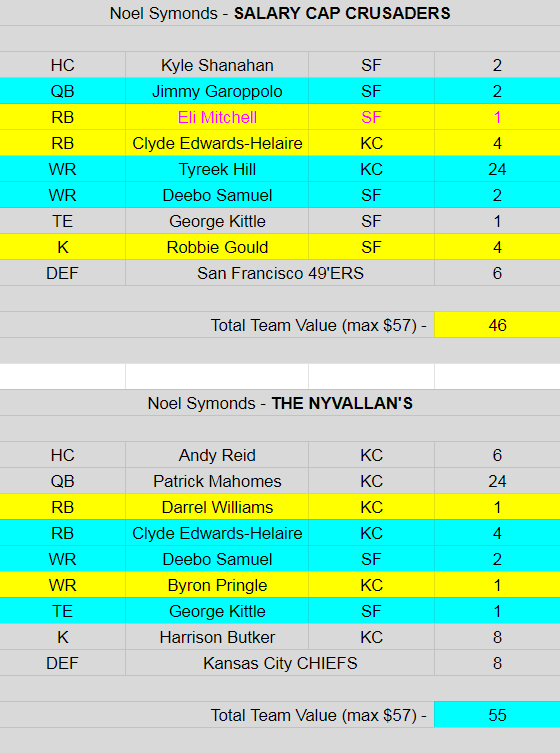 Okay all new team line ups are live and showing on Google Sheets, I did not recieve any trades from ‘Mike Mark’ (YellowMoney) or ‘Sam Devereux’ (s.devereux) in this third and final trade window?