I really enjoyed doing Cricket XI’s free fantasy T20 Blast game last season so thought why not do a couple of leagues (Classic and Head to Head) again for this season’s iteration. Both leagues will be £5 entry (same as last season) and Winner Takes All affairs. This seasons tournament is spread over 3 months:

​I’ve set up 2 leagues - one is an open league where you’re all on a ladder based on your total fantasy points scored. The other is a head to head type league where you play one other team from the league each round and you win, lose or tie. A win is 4 points, a Tie 2 points and a loss 0. That decides your position in the league with tie breakers to split teams such as points % (difference between points scored and points scored against you). In the head to head league after Round 15 (so Rounds 16 & 17) are knock out rounds - for those teams that qualify (aka the semi finals and final). The eventual winner of the knockout final is crowned champion at the end of the tournament. Another thing to note is if we have an odd number of teams in the Head to Head league sometimes the game site puts one team on a bye every week or sometimes it adds in a random team to level up the leagues so there are no byes. There does not seem to be a set formula on this (I guess the guy has not decided whats best regards this) so we have to go with whatever the game site does but I just wanted to mention this incase we do end up with an odd number of teams at the start of play in the Head to Head league. If the game site does add in a random team this will change the fixtures for Round 1 so just be aware of that as sometimes the guy behind the site is slow to do this. I personally think an extra unpaid for team is better than bye weeks but thats my personal preference.

People are welcome to join one or both leagues and I hope people will feel £5 is not much at all and give these leagues ago. The season starts (Round 1) Wednesday, 14 :30 BST, 9th June so there’s very little time to go (less than a week).

Usual method for payment - if you don’t know what that is or have forgotten just PM me from here (the TFP forum) and I will respond with the low down.

Finally, I must point out due to new players joining my IPL and County Championship Cricket XI leagues earlier this year and not making contact with me and not making any attempt to pay the internal entry fees I now have to be stricter. Any teams not paid for just before season starts, I will delete from my league without notice. I only have the ability to delete teams before a game starts on Cricket XI so I am not having any teams included that are not paid for in advance of future tournaments starting.

All game rules etc., are the websites and can be found under the HELP tab on site but to aid you here is a link to their points scoring, league rules, transfers, FAQ’s etc: Cricket XI T20 Blast / Help

Very happy to report everyone in both leagues has paid so prizes are as follows (Winner Takes All):

A big Congratulations to Andy Smith / Rick_Spangle - who won the Open Classic ladder style league and yours truly - yep me - Noel Symonds / bluelionman who beat Thomas Bryan in the final for the second straight year. 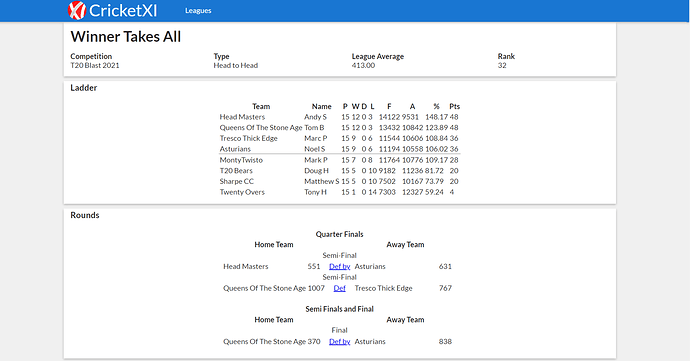 I plan to run both of these leagues again next year (if Cricket XI runs the game) so look out here on TFP forum for the game info when game site goes live if you want to get involved.