My friend (McBear) noticed CricketXI.com was doing a free fantasy IPL game and the season actually starts this coming Saturday - so I thought why not do a couple of leagues (Classic and Head to Head) on the tournament. The season lasts just over 6 weeks:

I’ve set up 2 leagues - one is an open league where your all on a ladder based on your total fantasy points scored. The other is a head to head type league where you play one other team from the league each round and you win, lose or tie. A win is 4 points, a Tie 2 points and a loss 0. That decides your position in the league with tie breakers to split teams such as points % (difference between points scored and points scored against you). In the head to head league I am not sure if it has a playoff or not. The website says I’m meant to have the choice when I set up a private league but it did not give me such a choice during the league’s creation?
Despite several messages sent on Facebook to CricketXI via their social media page to ask about this they have failed to respond. I am hoping there is a semi-final/final after the end of 13 rounds as it says there are 15 rounds in total but it is what it is CricketXI run the game. Whichever way they go whichever team is crowned champion at the end of the tournament is the winner.

People are welcome to join one or both leagues and I hope people will feel £5 is not much at all and give these leagues ago. The season starts (Round 1) 15:00, 19th September (BST) so there’s little time to go (less than a week). The head to head league requires me to designate how many teams so I’ve opted for an 8-team league though I can adjust up or down as shown in the screen grab below and I will adjust as necessary but to run it needs a minimum of 4 entrants (so 3 more other than myself).

Any one new to my fantasy money games just PM (Private Message) me from this forum for how to pay your entry fee and I’ll reply with details.

All game rules etc are the websites and can be found under the HELP tab on site but to aid you here is a link to their points scoring, league rules, transfers, FAQ’s etc: Indian Premier League 2020 / Help

Okay step forward David from Nottingham team name Nottingham Nights - you’ve joined my Head to Head league late but as your saving us from having unequal bye weeks I’ll allow it but you need to pay ASAP.

I was waiting to I heard back from Cricket XI as they are very slow at replying and only way to contact them seems to be via social media - Facebook or Twitter.

I could not understand how my head to head league at first had 9 teams in it and 1 team on a bye each week - this would have been okay had the byes equalled out but I noticed they did not and some teams had 2 byes others only 1 making the comp unfair in my opinion.

Then a new team appeared late and I’d no idea who they were (to chase for payment) as I’d not been contacted by them nor how a team could join a head to head type league late but was glad this cleared up the bye issue.

Finally, today Cricket XI have replied and sent me this:

So now I know what happens and what they do with Head to Head leagues that get an odd number of teams. This will help me going forwards not worrying about getting even numbers as I know the system will randomly fill my league with a team. Naturally I cannot chase an unknown entrant for payment nor have they chosen to be in a money league so they will be deemed a free team (not in for the money).

So, I can now confirm all 9 teams who joined the league of their own free will are competing for the pot of £45 (9 x £5) and team Nottingham Nights - David is the filler team - not in for the money. So, if they make the final then it will be their opponent that collects the dough.

This will also be the precedent now for my Head to Head cricket money leagues on Cricket XI going forwards in how I deal with them should we get an uneven number of teams. We will let the game site add in a random team not in for the money to even my leagues up and avoid having byes for any teams.

Why are people so afraid to use their real names in fantasy game leagues?

I hope for the sake of my winners history records ‘Private’ does not win this league!

If so I’m listing them as Private Benjamin - also they will need to have a Pay Pal account with the name ‘private’ to claim the winnings!

Big congrats to Rick_Spangle (Andy Smith) who won both my inaugural ‘Classic’ and ‘Head to Head’ fantasy IPL leagues for 2020.

He pockets £40 prize winnings for the ‘Classic’ league and £45 for the ‘Head to Head’ league. 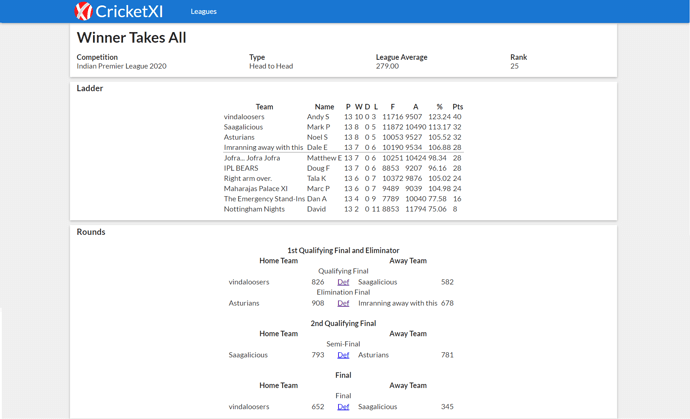 Hope any of you seeing this that like cricket will join in next year as I do plan to run these small stakes money leagues again.