Sadly, as you may well know (if you like fantasy cricket) the Telegraph gave up running fantasy cricket games last year, so I had to look really hard to source an alternative and luckily thanks to another fantasy cricket fan on a fantasy forum I found Cricket XI’s game. Since then, I have done several of their fantasy cricket games on various tournaments and tours all over the globe and they’ve been a lot of fun. So now a year later it’s time for County Cricket again and I have set up 2 small stakes money leagues once again.

Alas the players list is not broken into position groups when selecting a team (batters/all rounders/bowlers/wicket keepers) but other than that it’s really a great little game - especially with live scoring during games.

There is no spin off leagues (runs/wickets/starting XI) which is a shame, so no breakdown of runs scored or wickets taken but what they do have is a choice of league styles - classic open or a head to head. So, what I do is create a league of each type. The open league can have as many teams as wish to join it but the head to head league can have a maximum of 16 teams. To give a small interest for the season I’ve decided to keep the entry fee the same as I did last year - £5 entry each league and both are ‘Winner Takes All’.

People are welcome to join one or both leagues and I hope people will feel £5 is not much at all and give these leagues a go - it’s always more serious when people play for money no matter how small the stakes, it makes it competitive and worth the time investment to do the best you can. The season starts (Round 1) 11:00am, 8th April so there’s very little time if you wish to get involved.

The head to head league requires me to designate how many teams so I’ve opted for a 16 team league though it will run with a minimum of 4 teams - also if we end up with an odd number of teams Cricket XI in some games adds in a random team to level it up - other games it gives one team a bye each week. Last year in the county game it added a random team in. It’s not something I can choose and just have to roll with whatever the man behind the game site opts to do. If Cricket XI add in a random team if we’re an odd number at the start, then this will change everyone’s opponent for Round 1 and it’s just something that has to be lived with but as county games are 4 day affairs it will happen pretty quickly and certainly before the first game round has finished - usually by the end of day 2.

Please spread the word as in both leagues the more the merrier - forward a link to this info on to friends, family, work mates or anyone you know that might be up for taking part - hell please call them and twist some arms as there is so little time for me to recruit, I appreciate all the help I can get in getting a big league. Everyone basically has until Thursday morning to join and then it locks come start of the 1st round of games.

Anyone reading this who does not know the score re paying me your entry fees just PM (Private Message) me from here (the TFP forum) - or hit me up on Discord and let me know tou’ve joined and I’ll tell you how to do so.

My very best regards - I hope to see your team in my league(s) soon,

All game rules etc., are the websites and can be found under the HELP tab on site but to aid you here is a link to their points scoring, league rules, transfers, FAQ’s etc: CricketXI County Championship 2021 HELP

Who is this teams owner:

I deleted once as I didn’t know who they was and no one contacted me to say its their’s and they have rejoined a second time - so if the owner has not made contact by 10:30am then I will delete team again.

Boots C does not sound like a real name so I can’t chase person up for payment as no clue who they really are and if they win it ruins my winners history records with some weird name so unless I know who is behind team it’s getting binned.

Well I binned 2 teams as they didn’t seem to have real names, no one had been in contact with me about them and I’d have no chance at tracing them to chase for entry fees: 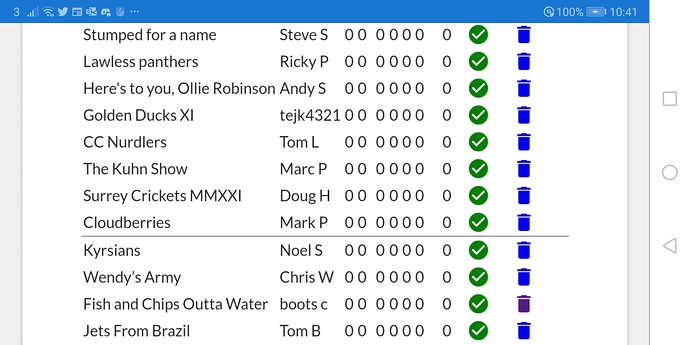 If your not going to use real names it’s imperative you contact me ASAP after joining so I know who you are. I actually care about my leagues and keep a winners history so prefer it if people can join using real names. I have one guy who’s joined since the above screenshot was taken just using initials and had I had an odd number of teams they would of been the one chopped to level off league and avoid bye weeks. So please if you can join using your real name. Thanks. This site doesn’t display full surnames so privacy is not really an issue.

Hey all - just to advise your Round 1 opponent will probbaly change between Day 1 and Day 2 - this is becuase we are getting 2 late entrants added in by the site - this is because tejk4321 has come forwards and is a mate of mine called Tony H (silverflash) so I was rash to delete him - he didnt like the idea of signing in by FB so whtever option he signed up with it took his username off there - tejk4321 - and he didn’t let me know until after I’d deleted this team as mentioned above this morning. Also to make league not have bye weeks we need an even number of teams so I have convinced a guy from the Open Classic league to also put his team into the Head to Head league.

I feel this is better as a full league of 16 teams mean we remian with 8 people making the knockout stages where as if we stayed at 14 teams I would reduce league to 6 playoff spots.

I know its not idea changing opponent in the first round but CricketXI often does that leveling off odd number leagues with a random team to avoid bye weeks so would happen anyway if we were an odd numbered team league.

Some will win some will lose changing opponent but over the long haul its not going to effect your chanes of making post season as you only have to be in the yop 50% of teams o make the knockout stages.

Thanks for your understanding.

To let people know state of play I will bold and cricket bat you when I have recieved payment for your entry:

Stumped for a name | Steve S

BossBeechyScoop XI | Stephen B
Stumped for a name | Steve S

First of all, I am wondering if anyone in the Winner Takes All league could explain why two teams have a ‘2’ next to their name instead of a 1 and are therefore on a lot more points than everyone else? Surely if P is meant to stand for Played then everyone should be at 1, because there has only been 1 round of matches?

Check out the BLM fantasy games community on Discord - hang out with 46 other members and enjoy free voice and text chat.

Yeah very strange Matt, until you pointed it out I’d not noticed it. I’ve messaged CricketXI about that see what they say. They some times take a day or 2 to respond. Only way I’ve found to be able contact people behind site is via social media - there on Facebook and Twitter. 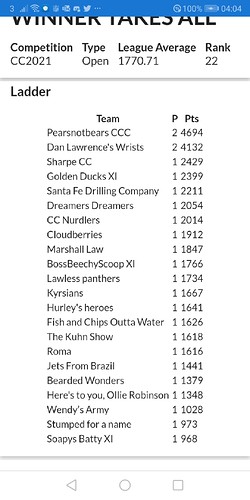 It’s clearly an error but what’s occured I’ve no clue hopefully now I’ve flagged it they will investigate and fix.

Edit: League has either sorted itself out or guy behind website fixed it but either way it appears fine now.

Okay - just want to put everyone on notice as I don’t know all of you but I advertised on social media to grow my leagues and did a lot of direct marketing but still many of you are yet to make contact and even more of you have yet to pay.

I’m not gonna chase people or stress over it so this is how it’s gonna work. Anyone who has not paid by end of month will no longer be involved. In the Open league I will get your entry deleted and in the Head to Head league alas I have to keep you as its started but you won’t be in for the money and I will do my best with the guy behind the site to penalise you to try and make sure your not teams that make the playoffs or if you do see if the site admin can swap you out for another team.

Okay it’s 3rd of May and the following teams did not pay - come the 8th of May it will be exactly 1 calendar month after the start of the County Championship season by which time I hope to have the non paying teams in the ‘Open League’ removed and those in the ‘Head to Head League’ if not paid up before the 8th May (1 month to the day the season started) then they are out the running for the money and not welcome in my games going forward.

Also any of you that didn’t pay - please don’t join any of my games going forward - it’s choice, no gun to anyones head to join a money league and I can’t stand folk that choose to freely join such a league that requires effort using a password or such to get in then make no attempt to pay - it’s just not cricket!

The Head to Head teams I’m more mad with as I had others that wanted in but the max allowed is 16 - so thanks to you I denide others who may have paied. Looks like I’m gonna have to insist on payment first next season before giving out the league entry code!

I am sad to say due to the above welchers the prizes for the leagues are as follows:

This experince will also change the way I run games in future - if your new you will have to pay by the eve of a tournaments start otherwise I will delete your team while I’m still able to before a game commences. So basicly those who are tardy at paying will find their teams culled from my money leagues within 24 hours of a games start going forwards (unless I have arranged with you a dispensation but this will only be for those with a good history and record at paying in the past).

Bit gutted after knocking out the welchers in the Head to Head league to many teams made the finals including a welchers team - more teams than we would of had in post season had we been just a league of the 11 paid for teams only. It also just so hapens the last team in (8th seed) won it to and after knocking out the welchers from the Classic Open league same guy also came second (bumped up to 1st place) as true 1st was a welcher - kind of pleased they miss out on a nice prize pot by not paying their entry fee so congratulations to Tom Bryan - Jets From Brazil that won both Leagues (Classic and Head to Head) pocketing £70 for the Classic Open league and £55 for the Head to Head league - nice! 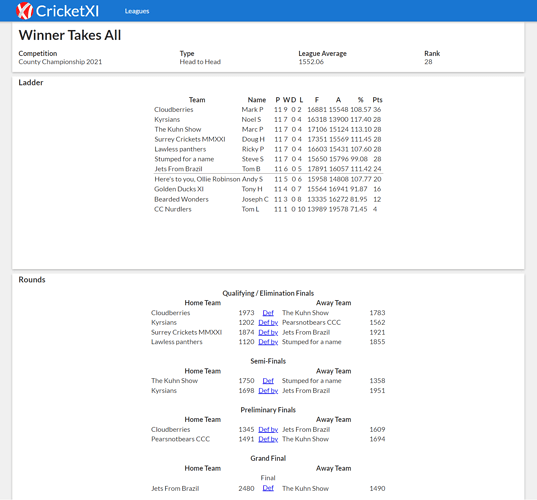