Australia’s domestic T20 cricket tournament is here. In a new move for me I am trailing a mixed classic ‘Open’ league where by people can choose to play for free or for money. So, all are welcome to join my Big Bash Classic Open style league. However, due to the nature of the league with a play-off format at the end means I feel it only fair to make my Head to Head league only a money league - otherwise paid players could be knocked out of post season at the expense of free players. So, to avoid that possibility am making the Head to Head league paid players only. So, any teams in the Head to Head league not paid for well be removed from the league just prior to the start of the tournament. Once the tournament has started, I will confirm how many paid teams are in the both the Classic league and Head to Head league here on this thread where I will also confirm the cash GBP prize pay outs for both leagues.

I’ve set up 2 leagues - one is an ‘open’ league where you’re all on a ladder based on your total fantasy points scored. The other is a ‘head to head’ type league where you play one other team from the league each round and you win, lose or tie. A win is 4 points, a Tie 2 points and a loss 0 points. That decides your position in the league with tie breakers to split teams such as points % (difference between points scored and points scored against you). In the ‘head to head’ league there are play offs over the final rounds for the teams that make it.

The Head to Head league needs 4 teams minimum to run - so 3 more on top of mine.

People are welcome to join one or both leagues and I hope people will feel £5 GBP is not much at all and decide to play for money. The season starts (Round 1) 08:15, 5th December (GMT) .

Please forward the link to this post to any friends or acquaintances you think might be interested - more the merrier (and bigger the prize pot hopefully).

If you don’t know the score regards paying (likely, if your new to my money games) just PM me from here with your e-mail address and I will send back details. You can partake from anywhere in the world - it’s not an issue.

All game rules etc., are the websites and can be found under the HELP tab on site but to aid you here is a link to their points scoring, league rules, transfers, FAQ’s etc: Big Bash 2021/22 Help

To let people know state of play I will bold and

(cricket bat) you when I have recieved payment for your entry:

Despite checking everywhere (TFP, FISO, Discord, my e-mail, FB Messenger etc.,) I’ve had no contact nor entry fee from Wilts XI | Rich W - in my H2H mini league. As per my internal rules with first game stating in 2 hours time I must delete unpaid for teams in that league. This truly sucks as it will reduce entrants within my Head to Head league to an odd number meaning bye weeks will most likely occur.

I truly welcome new entrants to my leagues but don’t understand why so many join but never make contact to find out how to pay the small entry fee (what makes up my leagues prizes).

Anyone reading this that joins my money league and is new, just PM me to say and ask for payment details. Simples!

Okay I can confirm 6 teams are playing for money in the Open League and 7 in the Head to Head League.

I deleted the non paying team in the H2H league - however in the Open league it was choice to play for money or just for fun and 1 person went for the free option.

So prize money is £30 in the Classic Open League and £35 in the Head to Head League - both are Winner Takes All.

Hope you enjoy the season.

Big congratulations to Mark Pearson (who won the ‘Classic Open’) and Douglas Hay (McBear) (who prevailed in the ‘Head to Head’) fantasy BBL 10 leagues for 2021/22. 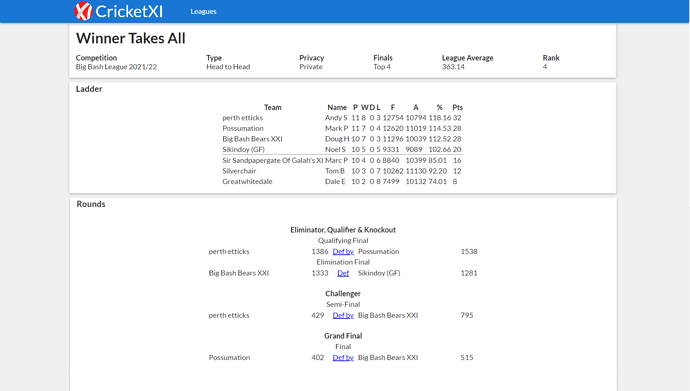 I hope any one reading this that likes cricket will join in next time as I do plan to run these small stakes money leagues annualy on the 4 major T20 tournaments from around the world (IPL, CPL, Blast and Big Bash). Those being the Indian, Caribbean, English & Welsh plus Australian domestic T20 touranmanets.