This is the shortest notice I’ve ever done for a game as I was not going to do it as my attention was pre-occupied with other things but due to receiving some requests and actually taking the time myself to do a team over the last three hours have relented but alas due to time differences there is less than 4 hours before the first game starts so alas only those who have already done a team or those who see this information in time that can do a team before the season starts will be able to join my private leagues.

Also, in a new move for me I am trailing a mixed league where by people can choose to play for free or for money. So, all are welcome to join my Big Bash leagues if you see this info in time and do a team. However, if you wish to play for money in one or both leagues you must inform me ASAP.

My rule of thumb in future games I do this for is those playing for money must tell me before a game starts and everyone must pay up before season starts with the exception of where (like these leagues), I have set them up within 7 days of the start of a game/tournament/season and then people will have to let me know ASAP they are playing for money and must follow up with payment before Round Two starts. At which time I then will confirm with a list of players & team names that are competing for money.

image1395×114 4.96 KB
I’ve set up 2 leagues - one is an ‘open’ league where you’re all on a ladder based on your total fantasy points scored. The other is a ‘head to head’ type league where you play one other team from the league each round and you win, lose or tie. A win is 4 points, a Tie 2 points and a loss 0. That decides your position in the league with tie breakers to split teams such as points % (difference between points scored and points scored against you). In the ‘head to head’ league there are play offs over the final rounds for the teams that make it. I am not sure of the exact format the game site will use as I’ve never done the Big Bash game before but it usually follows the leagues real life format. Whichever way Cricket XI go whichever team is crowned champion at the end of the tournament is the winner.

To make a little bit of interest for those that want to play for money each league has an optional entry fee of £5 each and both leagues are ‘Winner Takes All’.

The Head to Head league needs 4 teams minimum to run - but I am going to be up throughout the night on Discord, Facebook, TheFanPub.com, Twitter etc., and using my fantasy games contact list to recruit so feel confident of getting at least 4 teams involved even at this extremely short notice - especially as people can enter for fun and not just for money.

People are welcome to join one or both leagues and I hope people will feel £5 GBP is not much at all and decide to play for money. The season starts (Round 1) 08:15, 10th December (GMT) so there’s very little time. The ‘head to head’ league requires me to designate how many teams so I’ve opted for an 8 team league though I can adjust up or down as shown in the screen grab below (and I will adjust as necessary) but to run it needs a minimum of 4 entrants (so 3 more other than myself).

For those who wish to play for money and don’t know the score regards paying just contact me by PM (Private Message) from here (TFP forum) and ask me.

Big congratulations to Tom Bryan who won both my ‘Classic Open’ and ‘Head to Head’ fantasy BBL 10 leagues for 2020/21.

He pockets £25 prize winnings for the ‘Classic’ league and £30 for the ‘Head to Head’ league. 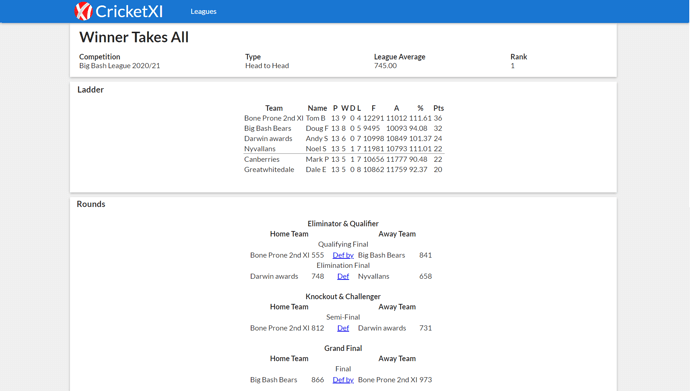 Hope any of you seeing this that like cricket will join in next time as I do plan to run these small stakes money leagues again on the 4 major various T20 tournaments around the world (IPL, CPL, Blast and Big Bash).