I noticed CricketXI.com is doing a free fantasy Ashes test game which starts this coming Wednesday morning (00:00am) UK time - so I thought why not do a couple of leagues (Classic and Head-to-Head) on the tournament. It says the game lasts 2 months (5 Tests). 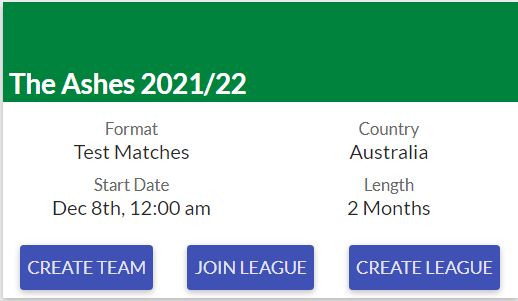 I’ve set up 2 leagues - one is an open league where you’re all on a ladder based on your total fantasy points scored. The other is a head-to-head type league where you play one other team from the league each round and you win, lose or tie. A win is 4 points, a Tie 2 points and a loss 0. That decides your position in the league with tie breakers to split teams such as points % (difference between points scored and points scored against you). In the head-to-head league the top two teams in the league play against each other in the Final (5th Test) to decide the Champion.

People are welcome to join one or both leagues and I hope people will feel £5 is not much at all and give these leagues ago. The game starts (Round 1) 00:00am, 8th December (so Tuesday night going into Wednesday morning - just to be clear) so there’s little time to go (less than a week). The Head-to-Head league requires a minimum of 4 entrants (so 3 more other than myself) to run. Also, if we end up with an odd number of teams in the Head-to-Head league the site will put one team each round on a bye.

Payment by the usual means - if your new or have forgotten just PM me from here with your e-mail address and I will reply with full details on how to pay your entry fee.

To let people know state of play I will bold and

(cricket bat) you when I have recieved payment for your entry:

The Whitest Boy Alive | Tom B

The Whitest Boy Alive | Tom B

Okay I can confirm all entrants have paid up in both leagues (Open Classic & Head to Head).

So prize money is £40 in the Classic Open League and £50 in the Head to Head League - both are Winner Takes All .

Hope you enjoy the Ashes.

Well as an Englishman the less said about The Ashes the better, but fantasy games wise we do have different winners in each format of the game.