If the answer is yes, then read on my friend as I have just such a league drafting on the eve of the new Premier League season - that being Friday 11th September 2020 at 8pm. I have picked a live draft date and time for this league to give people some clarity as to when it will take place so they can know if they are able to commit to it or not and or make arrangements for it.

Each entrant that signs up can vote for the scoring settings we will use - either Classic or Head to Head (as we had in this league last year). One team one vote - which you will cast by posting on the leagues message board. Whichever option the majority are in favour of come Thursday night (10/9/20) at midnight (going into Friday 11/9/20- draft day) will be which setting we go with. If by some chance it’s a tie I will flip a coin - can’t really say fairer than that.

The entry fee will be the same as last season - £25 per team. I will confirm prizes after the live draft as soon as everyone has paid up which hopefully will be that very first weekend of the new season. I have to wait to then to know how many teams we have (unless I get a full quota of 16 players prior to then in which case I can then work out the prizes before the draft itself - which would be better. All entry fees will be paid back out as prizes 100%). 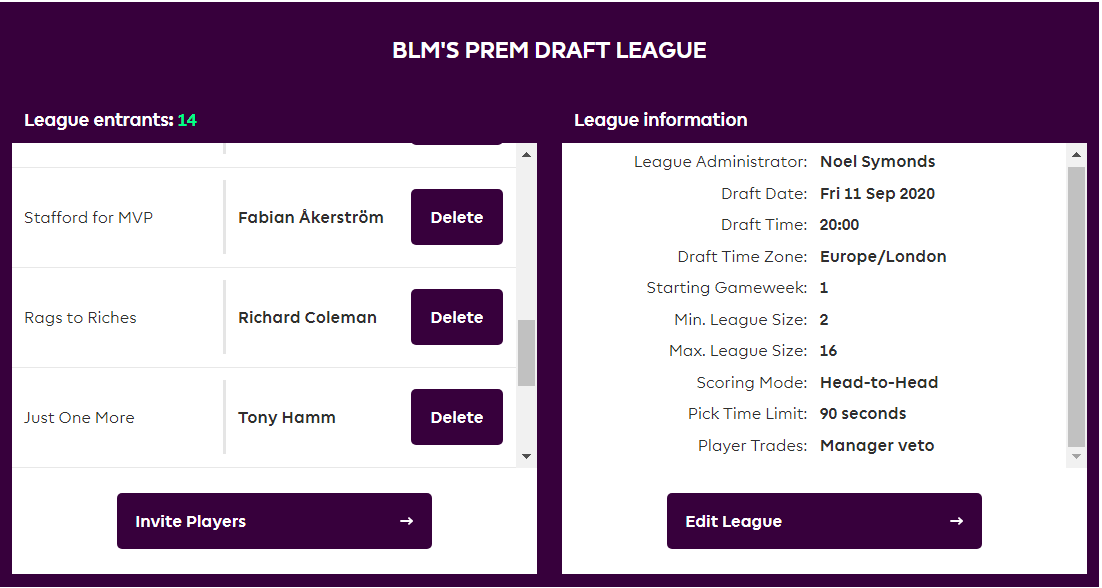 image1102×588 20.4 KB
The Scoring Mode can be changed depending on vote outcome I will keep changing it as per the votes cast.

You may have noticed from the above league info I have activated player trading in this league where it goes to a vote system - this means managers can vote against a trade (hopefully they only do this if they think the trade is unfair) but to get a trade vetoed it takes 50% of managers to vote against it - not only that a trade is approved at the waiver deadline and the system takes any non-team manager votes as approval. So, it is much more likely trades will go through than not - and also means managers should pay attention to trades when notified and use their veto option if they don’t agree with it.

I have chosen an eve of season draft so as much about the teams’ squads with regard to transfers ins’ & outs’ is known as possible, as well as to give me the maximum amount of recruiting time to try and improve on numbers - my league had 7 paid teams last year. I hope this year I can do better. Overseas players are most welcome to. 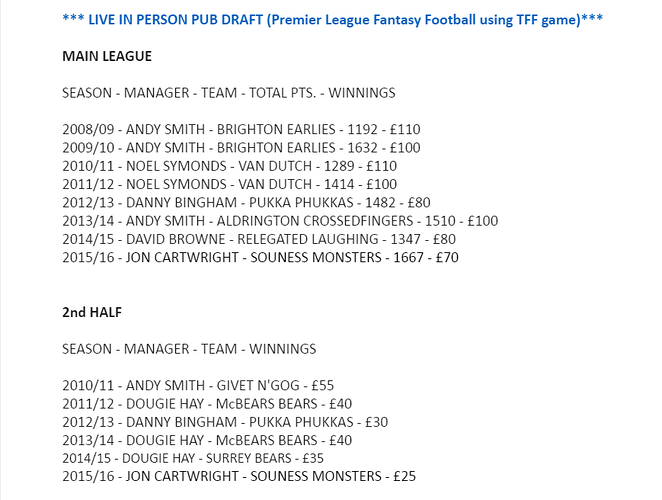 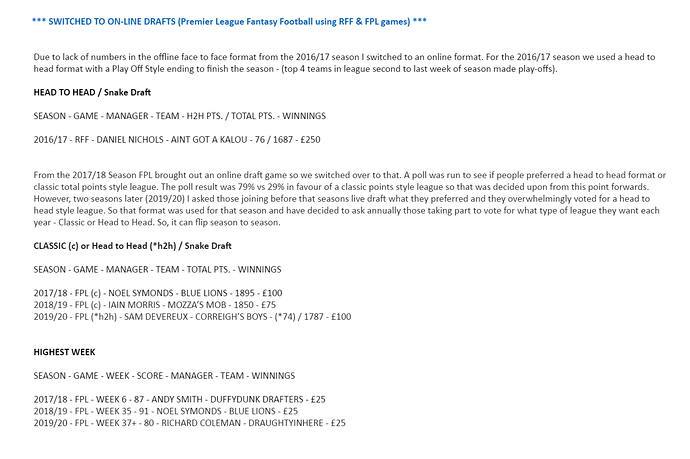 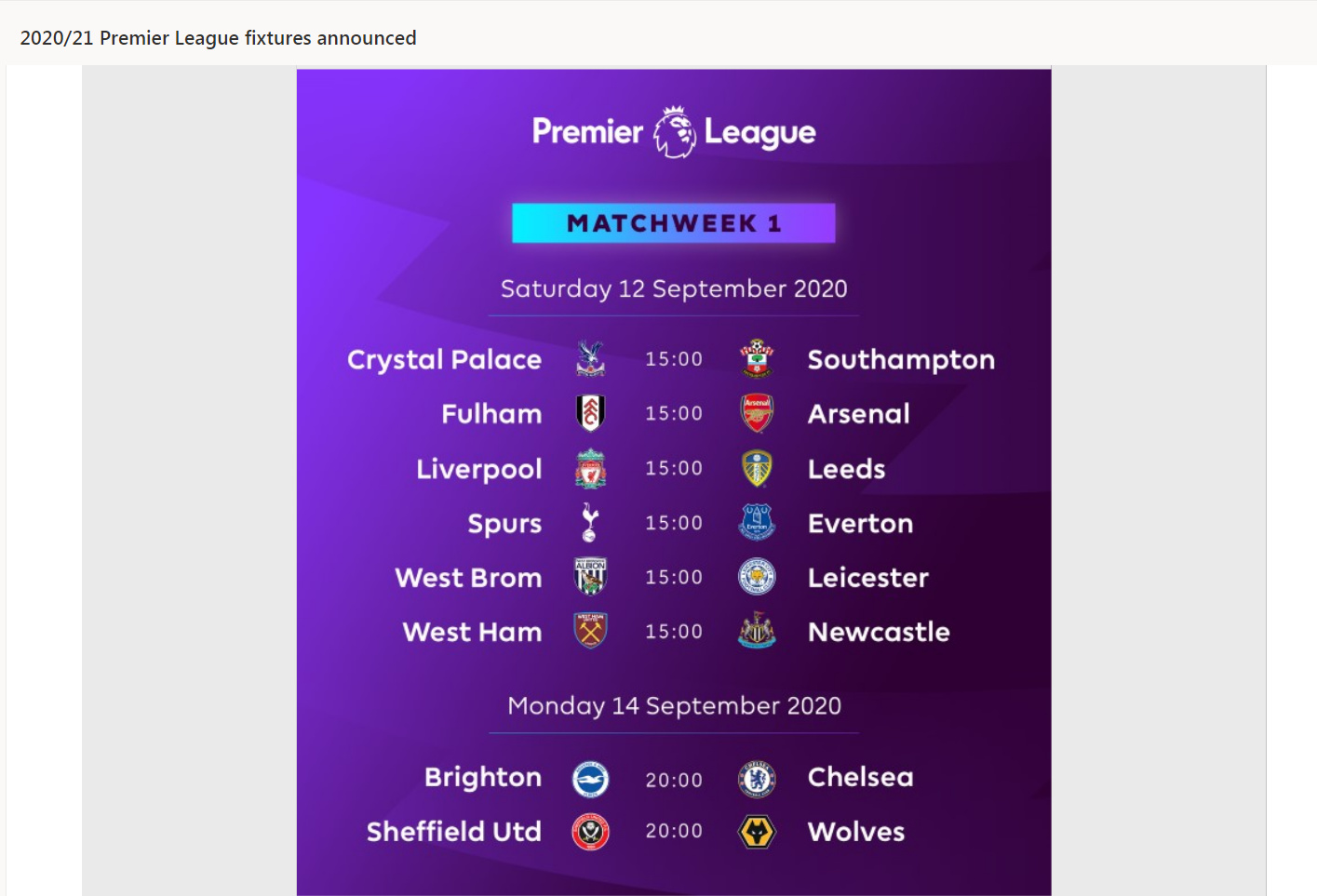 9 Paid entrants now… 16 is the max - don’t miss your chance guys & gals this is going to be so hard if the league fills out as its the lesser players on smaller teams will become so important.

Noel I’d like to play again, could you use some of my ‘credit’ from last year please.
Richard Coleman

Classic for Me Cheers

Hi Noel, im in if there is still space.

There’s still space but every ones looking at real weak teams as players gonna be spread thin over lots of teams. I’ve never done such a big league in football I’m excited to have to use the lesser known bods.

Your meant to post that on the league wall on the game site mate.

Just sent the money over for this mate.

Welcome to my league guys,

I hope you all have fun - I’m a bit behind checking payments and what have you so will confirm prizes once I’ve caught up and checked all have paid. I don’t have e-mail addresses for everyone in the league so decided to post this welcome on the TFP Thread instead.

I have just set up a Discord channel where all managers can chat to each other, discuss trades and generally trash talk if they wish all season long.

This is the invite link - (the channel only really works if many of you buy into it and use it):
BLM’S PREM DRAFT LEAGUE - DISCORD chat channel

May the best team win…

I thought for those not involved in my Prem Draft League it would be nice to let them see how such a big 14 team league panned out - as all info is only accessible to those within the league I think. 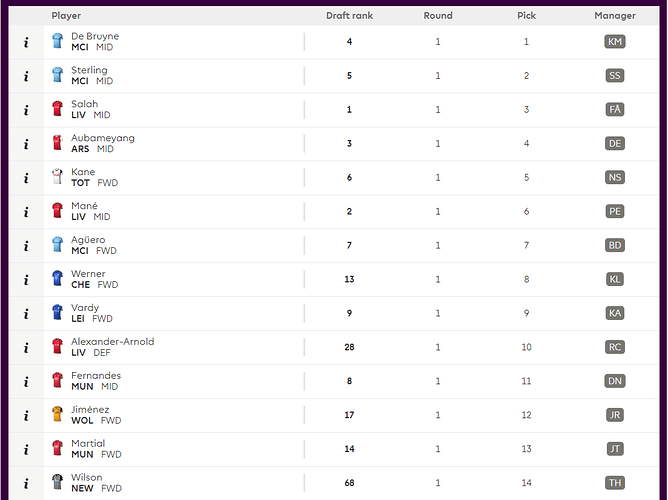 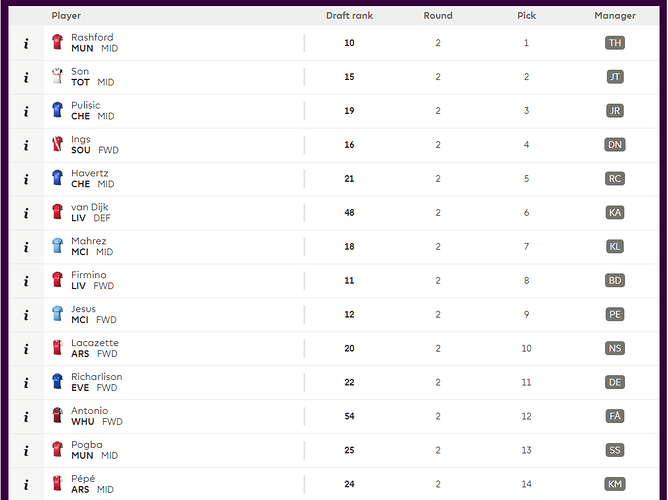 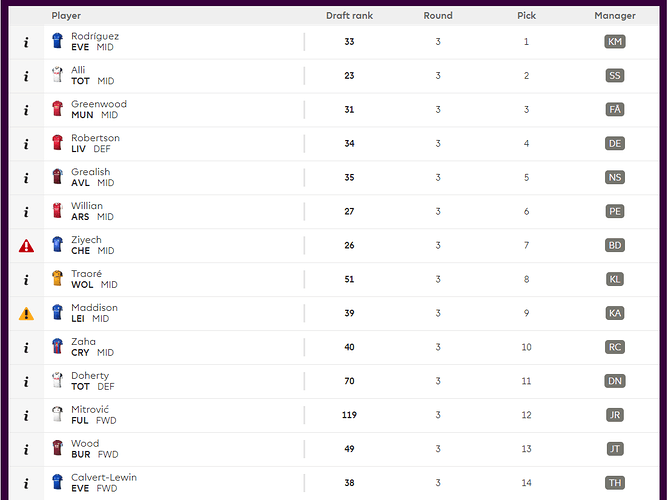 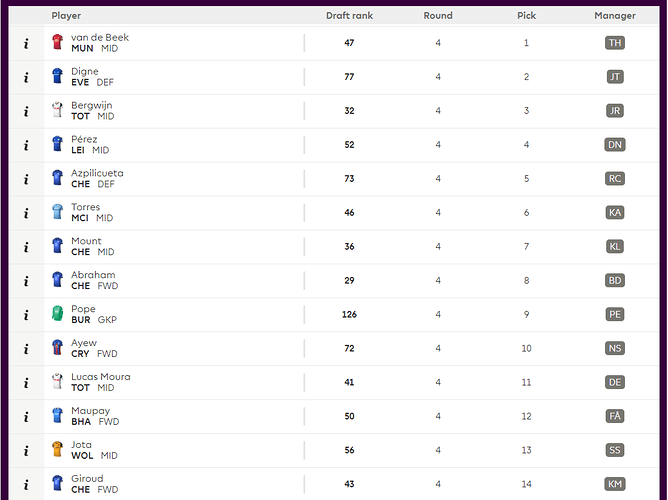 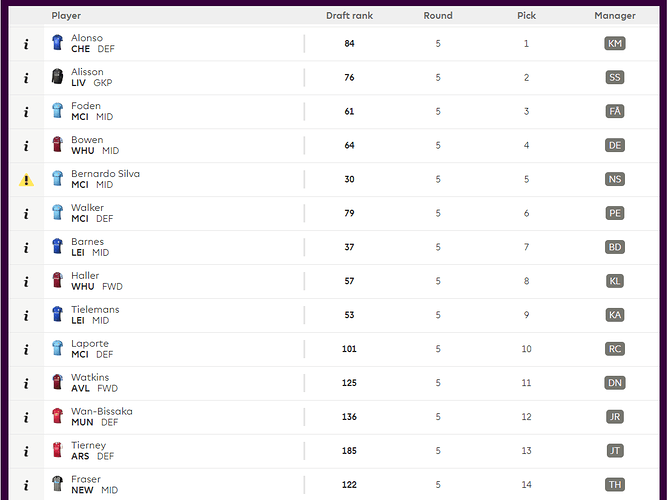 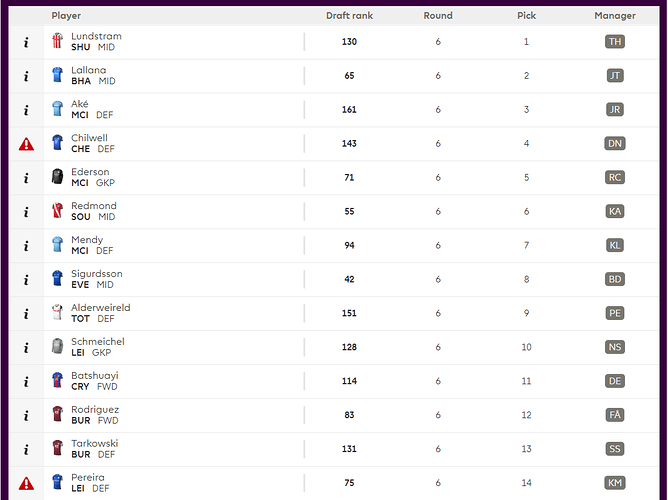 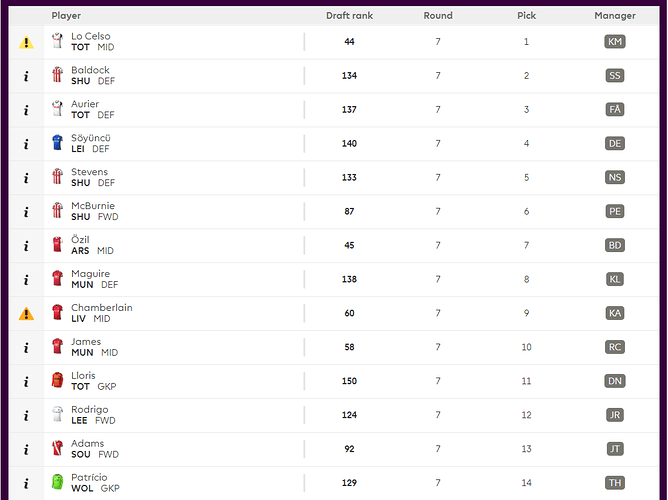 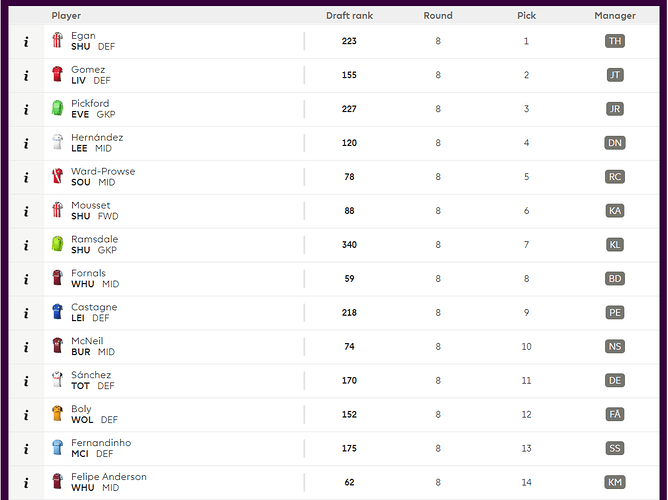 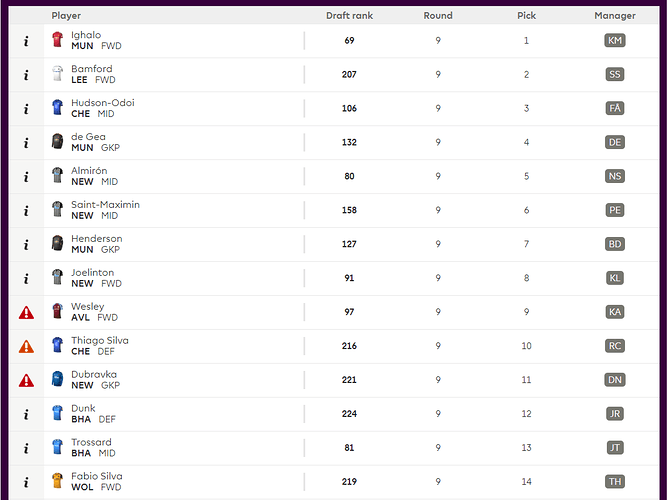 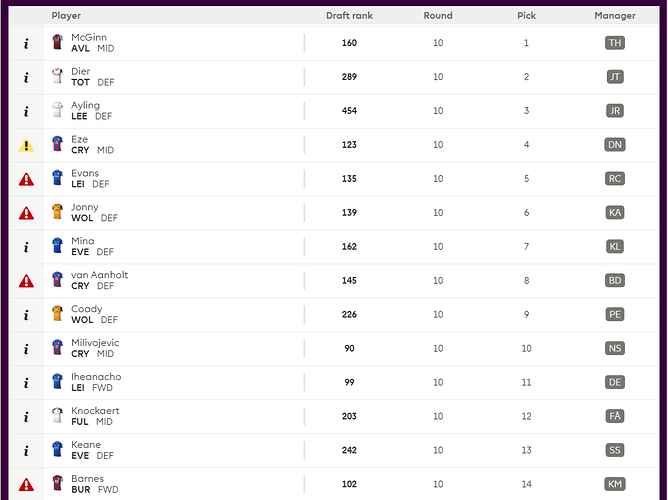 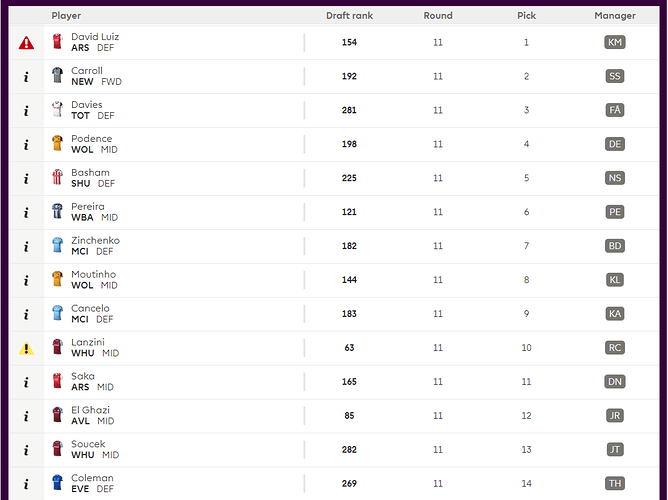 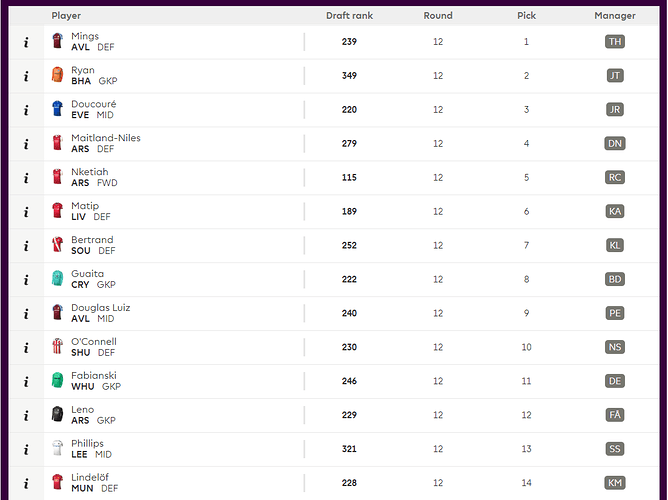 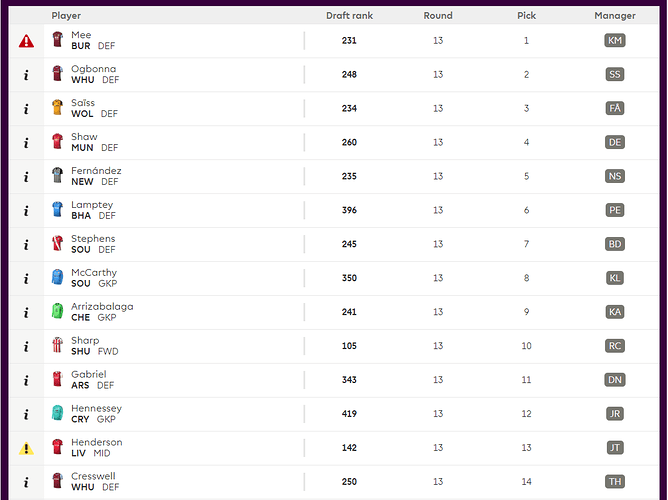 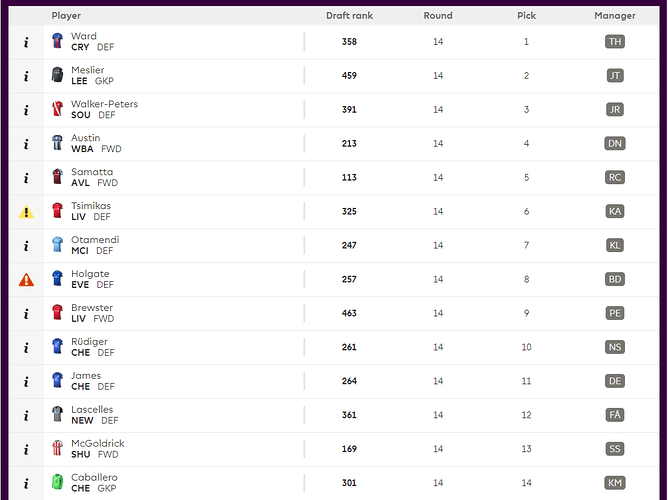 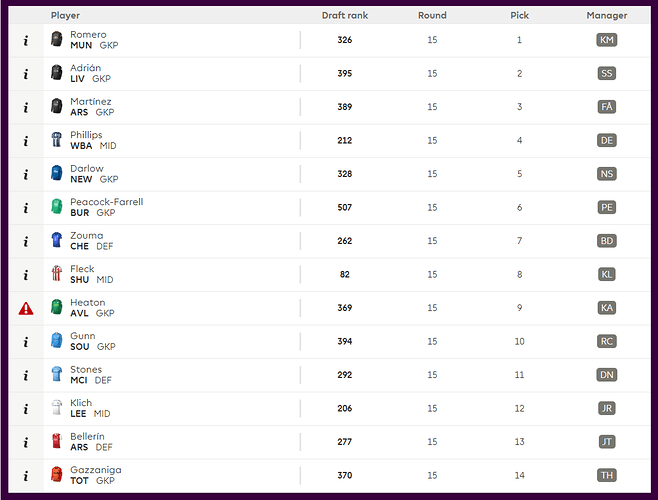 This has been my biggest online FPL draft entry pool to date and all my plugging and advertising of this game / money league seems to have paid off as there were 14 of us (the max is 16). So money collected in is £350 - 14 entries at £25 each.

I really am curious what a full boat (16 team draft) would be like so maybe next season I/we can hit the max! But I digress, this post is to confirm this years prize payouts as follows:

So in theory the maximum prize possible is £250 (as the winner could nab the best weekly score prize to - but equally gives everyone else something to aim for and keep trying their best to set line ups each week as if they can have 1 mega week could salvage their season by getting double their team entry cost back).

PS I ran a poll again this year as I did last year to see what type of scoring league was wanted and this year (same as last season) the majority were in favour of a Head to Head format. So this years league is once again a H2H format.