The following are my bets on the draft this year, in the order I put them on… interested to see what the rest of you folks have done.

£189 staked…
Bets 2 and 5 I am confident about and they would give me a profit. Not huge, but a profit.
Bets 3 and 4 have a chance and would be a nice bonus
Bet 1 has no chance…

1 - I like Jalen Ramsey. I think he is a really good, Tyrone Mathieu type of do everything in the back field player. I backed him a few weeks back, when Laremy Tunsil was still the bookies’ favourite and I was looking around for someone to oppose the favourite with. After the two big trades at the top of the draft I realise this bet ain’t coming in! Actually now, I would like him to slip a few spots so I can maybe get a nice price on him for Defensive Rookie of the Year !

2 - this was also a couple of weeks back, at the time I thought Goff and Wentz would go top 10, and there was a decent chance that one of Cook / Hackenberg / Lynch would also go round 1. This one now seems very likely to come in - all the recent drafts have had Lynch as a late first rounder

3 - I like Will Fuller. From the film I have seen since the draft build up, he seems like a joint best WR with Laquon Treadwell. I don’t quite get why Treadwell is the consensus favourite, so I am happy being on Fuller at 11-2 rather than Treadwell at odds on. The last four NFL.com mock drafts I’ve seen, one had Fuller as the first WR, another had him second, so I am still holding out hope!

4 - Last ten years: seven of those years, a TE went in round 1
(2006 Vernon Davis, 2007 Greg Olsen, 2008 Dustin Keller, 2009 Brandon Pettigrew, 2010 Jermaine Gresham, 2013 Tyler Eifert, 2014 Eric Ebron) - which suggests it should generally be an odds-on shot. Actually, it is currently 3-1. This looks a reasonable bet, especially as one single guy, Hunter Henry, has been the head and shoulders clear best TE prospect ever since the dust settled on the Superbowl. I just need one team late in the first round to bite…

5 - I did this bet a couple of hours after the Philly trade up to pick 2 was announced. I did some quick research and went #TeamGoff . The odds have moved in since and suggest that I guessed right. Fingers crossed!

What bookmaker did you use for these Jon? The options on skybet for the draft are quite limited.

These were all with Ladbrokes on line

Ahh probably the only account I don’t have, hehe. I quite like the look of the tight end bet and found decent enough odds on betway.

Tempted with the 2.5 qb’s if those odds are still available. Probably not though.

Oh my yes. Just seen the price. Not sure what I expected really.

The one I have pondered for a while is Ezekiel Elliot’s draft spot - Ladbrokes have set the over / under at 10.5… I think he should go around 10-15, but you can’t rule out a wild early grab by someone like the Browns or Cowboys. Think I would bet Over, but interested to hear other people’s view

I was quite tempted also with the over but have a feeling, like you say, that someone might grab him early.

I am hoping the Dolphins pick Elliot at number 13, as I am a dolphins fan haha. But like you said the Cowboys could pick him up at number 4 which would be rare for a running back in the draft.

After the reddit thread saying “Goff 99.9999% likely to be 1st pick”, I’m even more confident in my initial thought that Goff would be going to LA to be their new Californian QB. 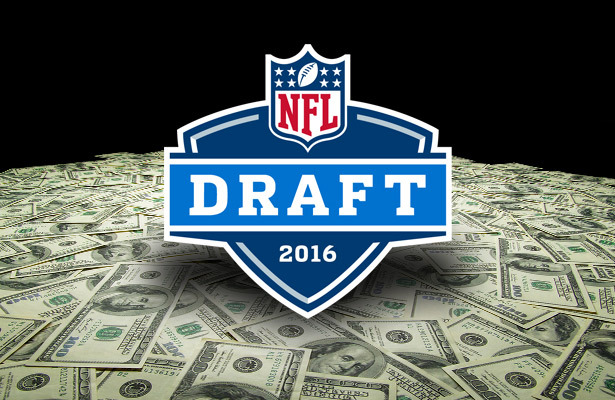 This is a look at the various markets on offer across the UK bookmakers for the 2016 NFL Draft. First we’ll take a look at the bets that are most likely to come in, but offer lower odds, in Sure...

Agree. The odds just aren’t there anymore though.

Said this on the Whatsapp thread too, but nice read, Mark

I love the Under 3.5 on WR’s in the first round. Hardly any teams seem to be nailed on to take one early, even the Vikings who have the biggest need do not seem certain to draft one in the first. Plus there are only 4 shortlisted by most of the experts, surely they don’t all get drafted.
The best price i’ve seen is 4/5 with Betfair.

Interesting, i think 3 WRs is the likeliest outcome - so if i had to bet on it i would go Under - but thats not a market i’m overly confident about either way

Not sure if the odds are available but consider:

And they have 11/4 Stanley first OT : unsurprisingly the price has come in since Mike Mayock mocked him as pick number 3 !

I think Chargers at #3 is the key to how the Top 10 will unfold. If they take Ramsey than I think the Elliot will go at 4 to the Cowboys . If Chargers take Buckner than Elliot I think will slide a little but I don’t think he will get past the Browns at #8 or the Browns trade down and he still goes at 8.

Maybe worth a small punt on Stanley at 11/4.

…the only two on Ladbrokes were Zeke Elliot and Möritz Böhringer…

OK thanks for checking. Sounds like this guy is on the slide… because of his bad knee.

Just had a look at the site. Quite like the look of these teams on their first pick:

Also like the look of over 3.5 QBS taken in first round at 11/10.
Jon Gruden is predicting 5 go in first round. I think it will be 4 with Cook and Lynch going.