Is it Xmas eve?

Glad I kept the xbox now, cant wait to see what the new app brings this year and where it goes in the future… 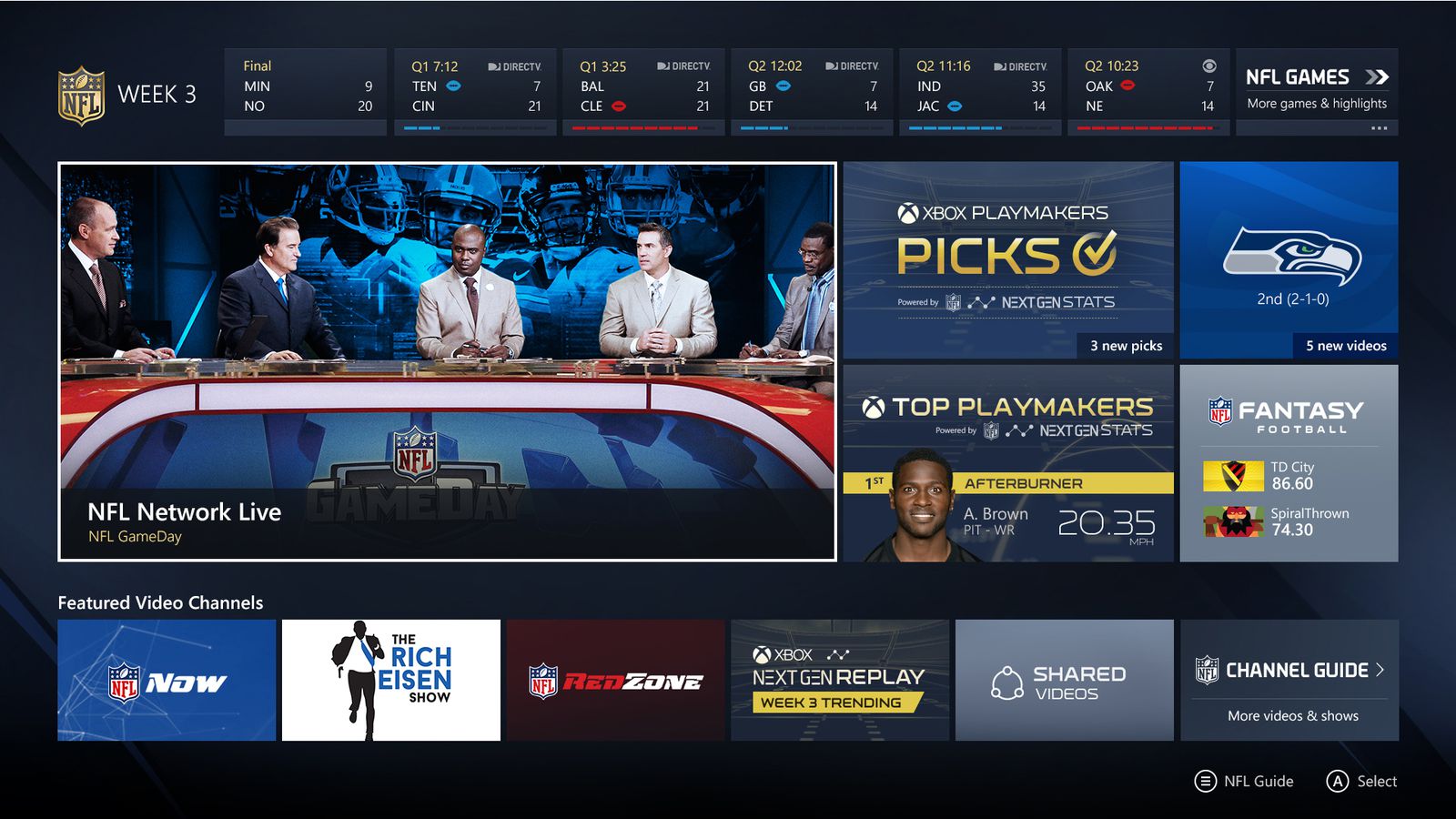 The Xbox One's new NFL app is a superfan's dream

It's very nearly football season here in the US, and that means Microsoft is ready to release a new and updated version of its NFL app for the Xbox One. Like last year's version, the NFL app...

I was just looking at that and thinking I need to get an Xbox One, and maybe I should put some similar real-time gameplay sections in the NFL Manager game I’m always procrastinating on. (Been debating lately whether to develop it as a fully UI-based web app or use a 3D game engine to build it.)

NFL on the XBOX One is Awesome. I loved it last season with all the videos, fantasy updates, game pass etc.

When is the new updated app available or is it only in the US?

I remember when game pass wasn’t included and I had to change my DNS server to a US one, install the App, then change back my DNS server, maybe I will have to do the same.

Yes, I still use a DNS service to watch the games and I agree, it really does seem to be the tool of choice for NFL watching, I love fantasy, stats, playbooks and NFL related news, the new app looks amazing and this is only the start as MS and NFL continue to develop their deal.

Adam, others may disagree but I would say the xbox is well worth the coin. I dont use the TV feature and the hand gestures are just a gimmick but I do use it for music, movies, gaming and all my NFL needs. I recall you making a soccer fantasy game I think? NFL manager game sounds great! If I had dev skills I would be creating a one day fantasy sports app for the EU. Its something we are missing and is amazing fun.

Only thing stopping me getting an Xbox One is that I have a PS4 and most of the games are the same on both. If Microsoft get a few good exclusive releases, and the NFL app supports Gamepass in the UK, I’d definitely get one. Right now I’m beaming the desktop PC to the living room TV to run Gamepass (which is pretty seamless thankfully but not as cool as the new NFL app).

Yeah, I worked on a live fantasy Premier League game last year, where you compete with 5 friends during a single match (each picking two players). Not really something I could easily run myself now though, as the live data feeds from Opta Sports cost a few grand a month for each league. If not for the cost of the data feeds, I could actually design and build an NFL version of that kind of app quite easily, probably a spare time project :-/

The NFL Manager app I’m slowly working on is more like the soccer Football Manager games, so it’s not tied into live data (you could play through a season in a day), it’s more about growing players, picking match tactics, then a turn-based in-match play mode. I’ve talked about it a bit with George but haven’t made much progress on it yet, but think I’ll try and crack on with it properly in the next month or two. If I just go ahead and build it as a mobile web app and keep it all menu driven, it’d all be quite straight forward and in my skill set - but I’m tempted to build it using the Unity 3D game engine and have proper (well, simplified) match simulations. Visually I had something very similar to the NFL app replays in mind.

Sounds like fun fella, keep me informed on how it goes, would like to see it down the line if you get it there.

The Xbox One does support the Game Pass in the UK without any DNS changes. It is there straight out of the box. The only part is that it blacks out the Sky Games.

With regards to NFL Fantasy & Stats, you can get jSon or XML feeds directly from the NFL.

You can also tap in to the NFL Fantasy Api, - Where you can get the stats after the games has finished.
http://api.fantasy.nfl.com/

Oh nice! Gonna look into that. Guessing it’s not quite as live as Opta’s 60 second updates, and they don’t mention the fees or request limits, but seems to have most of the data you’d need.

@CitrusPlayer do you still have access to GamePass on Xbox One?

I have the new app, but GamePass doesn’t show up. It is just not there.

I can still access other ways, but not via the Xbox. I do not appear to be the only one either.

Yes, its been like that for a couple of weeks now. The new app looks great and promises lots but as yet it does not include either the NFL Network or GP feeds. GP support have advised that its coming but no eta. When it comes it shall arrive just like a usual update for GP does on the xbox. If you open up the app now you shall see a small “NFL guide” bottom left, hit the appropriate button you then hit Y to access the settings. Here you shall shall find “NFL services” or something to that effect, this is where you will likely have to enter your creds for GP but until we get the update all that happens is a spinning circle. I’m not around for week 1 so I’m not letting it wind me up however it had better be sorted for week 2 ; )

It’s annoying me. All pre-season games have been watched via a laptop connected to the TV. It has worked fine, but just a real pain. I have noticed on the GP website that the Xbox logos have made a return, so hopefully it will be back soon.

I have seen the spinning circle

Thank you for your feedback.

no probs, heres hoping the update comes down soon & lets get some next gen replays and stats on the go!

And just like Xmas eve it looks like we have GP and NFL feed access via the new app on the console at the last minute! I have been able to login to GP and from there pick up the NFL Network feed. I’m guessing that the GP live coverage is under the option for 2015 games where we will be able to flick between all the live game feeds, just need to test that when a game is actually on

Worked fine for the opening game

Good to know, will start using it next week…

This looks awesome. Wish I’d have known this when deciding between xbox one & PS4. May have swayed me the other way.

@neonadam Out Of The Park developments were looking at an NFL manager game. Believe it has been delayed due to illness of the developer that was working on it and they are looking for a replacement to step in whilst he recovers. http://www.ootpdevelopments.com/index.php

Hmm. Yeah, the OOTP games are interesting, although a bit like Championship Manager taken to the spreadsheet-style extreme. Their hockey game looks pretty impressive though.

I’m more of a designer than a developer (though I started out as a web designer/dev so still dabble in a bit of web and app development), but have a few developers I might work a bit with. My main issue now is being stuck working 60/70+ hr weeks for a huge corporation then being too knackered to do much development during the weekends. A few years ago I had no problems working on numerous side projects alongside the day job…

At the moment I’m trying to decide whether to aim for something full blown (full roster management, turn-based matches) and spend the next 1-2 years developing it, or pare it down to something more streamlined and focused, a bit like an NFL New Star Soccer (perhaps controlling just one player), or focusing more on either the team creation/management side or the match engine part. Doing it all is a bit of a recipe for disaster, but at the same time, no one has ever done that properly either so it could be an opportunity.

The full blown thing sounds awesome Adam, I’d be hugely interested to see whatever you come up with!