Sad to report the following strike is awarded for NFL Week 11:

Ruled out this week

Analysis: The same applies to Chris Conley (hip), but on the plus side for the Jaguars, Laviska Shenault (hamstring) is slated to return to action this weekend and he should head the team’s Week 12 wideout corps along with Keelan Cole.

Sad to report the following strikes are awarded for NFL Week 16:

x1 Started QB - Nick Mullens - (SF) - OUT, was ruled out before his teams actual game day:

Analysis: Regardless of whether surgery is necessary, the 25-year-old quarterback has already been ruled out for the season, and C.J. Beathard will take over under center. Mullens is still being evaluated, but if he needs Tommy John surgery, there’s a chance he may be sidelined to begin the 2021 campaign as well.

x1 Started RB - Phillip Lindsay - (DEN) - OUT, was ruled out before his teams actual game day:

Analysis: With Lindsay having been ruled out, added Week 16 carries are available for Melvin Gordon, with Royce Freeman (hip, questionable) a candidate for change-of-pace duty, assuming he’s active for Sunday’s contest.

x1 Started RB - Cam Akers - (LAR) - OUT, was ruled out before his teams actual game day:

Akers suffered a high ankle sprain in Sunday’s loss to the Jets and will be sidelined for the Rams’ Week 16 matchup against the Seahawks as a result, Lindsey Thiry of ESPN.com reports.

Analysis: Akers followed up his career game Week 14 against the Patriots by leading the Rams in rushing again Sunday, but he also came out of the contest with an ankle injury. He’s expected to be sidelined at least one game, but he could potentially miss more. Should Los Angeles ultimately secure a playoff spot this week, the decision for Week 17 would presumably become easier. Some combination of Malcolm Brown and Darrell Henderson figure to replace him in the backfield in Seattle.

Sad to report the following strikes are awarded for NFL Week 17:

x1 Started RB - Frank Gore - (NYJ) - OUT, was ruled out before his teams actual game day:

Out for season finale

Gore is dealing with a lung contusion and has been ruled out for the Week 17 game against the Patriots, Al Iannazzone of Newsday reports.

Analysis: Gore left this past Sunday’s 23-16 win over the Browns early, but not before becoming the third player to reach 16,000 rushing yards in his career. The 37-year-old running back will miss a game for just the third time in the past 10 seasons. Gore will be an unrestricted free agent in March, and it’s unclear if he’ll return for his 17th NFL season.

x1 Started WR - Christian Kirk - (ARI) - OUT, was ruled out before his teams actual game day:

Kirk was placed on the reserve/COVID-19 list Saturday and won’t play in Sunday’s game against the Rams.

Analysis: It’s unclear whether Kirk tested the positive or was deemed a high-risk close contact. This is a major loss for the Cardinals as they look to keep their playoff hopes alive. Larry Fitzgerald (groin) is also questionable and trending toward a game-time decision. KeeSean Johnson, Trent Sherfield and Andy Isabella could all see increased usage in the season finale.

Analysis: With Hamler ruled out for Denver’s season finale, DaeSean Hamilton should be in line for an uptick in snaps and targets at wide receiver in Week 17 alongside starters Jerry Jeudy and Tim Patrick. Hamler, meanwhile, concludes his rookie campaign with 30 catches (on 56 targets) for 381 yards and three touchdowns in 13 games.

x1 Started TE - Harrison Bryant - (CLE) - OUT, was ruled out before his teams actual game day:

Out Week 17 after positive test

Bryant won’t be available for Sunday’s game against the Steelers after testing positive for COVID-19, Tom Pelissero of NFL Network reports.

Analysis: Cleveland had already moved Bryant to the reserve/COVID-19 list Tuesday after the tight end was deemed to be a close contact of an infected person or persons. Upon undergoing additional testing while in isolation the past couple of days, Bryant was determined to have contracted the virus. He’ll thus remain away from the team for the regular-season finale, though Bryant could have a chance to gain clearance for a potential wild-card playoff game, should the Browns earn a postseason berth. Cleveland will proceed with David Njoku and Stephen Carlson as its depth options at tight end behind Austin Hooper in Week 17.

x1 Started RB - Darrell Henderson - (LAR) - OUT, was ruled out before his teams actual game day:

On injured reserve, as expected

Analysis: As expected, Henderson will miss the regular-season finale and at least the first two rounds of the playoffs, assuming the Rams are able to qualify for the latter. In addition to Henderson hitting IR, the overall outlook for the offense has taken multiple hits, with Jared Goff requiring surgery on a broken and dislocated thumb Monday, Cam Akers tending to a high-ankle sprain of his own, and Cooper Kupp (undisclosed) landing on the reserve/COVID-19 list Tuesday. In the case of the backfield, if Akers joins Henderson on the sideline Sunday versus the Cardinals, Malcolm Brown will lead L.A.'s backfield, with Xavier Jones and Raymond Calais potentially getting reps as well.

x1 Started WR - Tyreek Hill - (KC) - OUT, was ruled out before his teams actual game day:

Ruled out this week

Hill (hamstring) has been ruled out for Sunday’s game against the Chargers.

Analysis: In addition to Hill, the Chiefs also ruled out Sammy Watkins (calf), which sets the stage for the Chiefs – who have clinched the AFC’s No. 1 seed and a first-round bye – to roll out a wideout corps headed by Demarcus Robinson, Mecole Hardman and Byron Pringle in Week 17. Hill is expected to be good to go for Kansas City’s playoff opener Jan. 16 or 17. 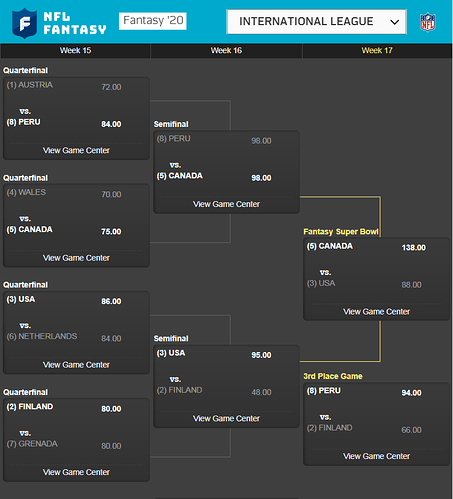 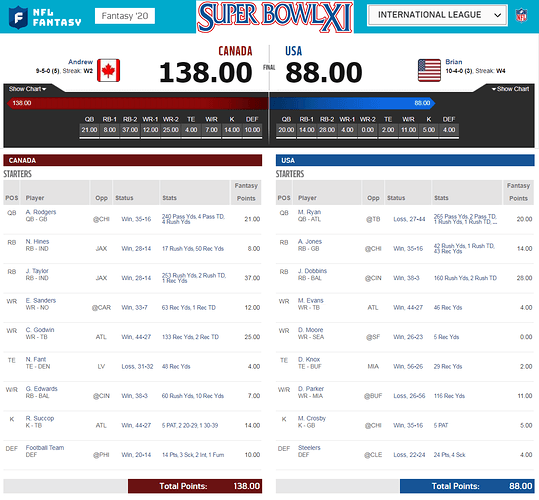 Updating my records I noticed a few Super Bowl records were broken this season by CANADA - firstly this country equals the most Super Bowl Appearances of 3 (joining REPUBLIC OF IRELAND, SLOVENIA and FINLAND who were all jointly on 3 appearances in the Championship game).

However by winning this season CANADA now joins FINLAND as the only country to win more than one fantasy Vince Lombardi trophy.

Furthermore CANADA under the management of Andrew Johnstone has smashed the highest Super Bowl score of 115 set by Uros Stager - SLOVENIA in Super Bowl S/B V (2014) and now has this record with 138. 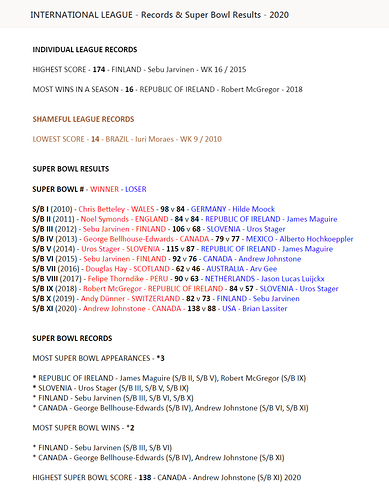